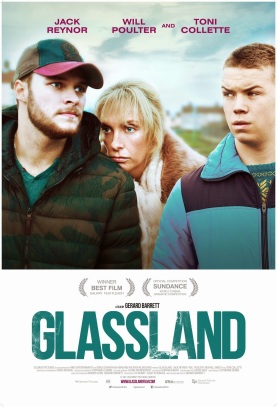 Rating: A/ From the title I thought this movie was about methamphetamine, since ‘glass’ is a synonym for crystal meth. It turned out to be about a young man’s mother with a pretty serious alcohol problem. In fact, Jean (Toni Collette) has hit the bottle so hard that she’s slowly killing herself, and her ever-faithful son John (Jack Reynor) both tirelessly cares for her and enables her.

Jean is perpetually shit-faced, completely dependent on her son to care for her and emotionally validate her, and infuriatingly fickle; when John lets her drink, he’s a ‘good boy’ and an all-around awesome son, when he pours her liquor into the sink and tries to force her to stay clean, she acts like she came straight out of the fucking Exorcist. I half expected her head to spin around and for her to stab herself in the genitals with a crucifix.

Jean also has a younger son with Down’s Syndrome (Harry Nagle,) who lives in a ‘home’ and about whom she has nothing good to say. The way Jean drunkenly describes giving birth to the disabled kid, you’d think he was the thing from Eraserhead and not a fairly functional young man who’s undoubtedly smarter than she gives him credit for. Needless to say, Jean is not a very likable character.

Watching Toni Collette portray the boozy, self-absorbed mess is like watching a train wreck, the best possible way. Toni Collette is a fantastic actress and a credit to any movie she does, and this is one of her best roles. You don’t know whether to credit her repugnant qualities and her utter narcissism to the booze or just her. I’ve never seen Jack Reynor before, but he’s excellent as his character navigates the ever turning hamster wheel of his mom’s addiction and the frustrating system. He and Collette share a real genuineness and spark on-screen, and all the co-dependence and heartaches are nakedly put on display in a way that makes Glassland all the more tender and painful.

This movie made me feel things, although I’ve never personally been in the situation of caring for an alcoholic parent, for all intents and purposes, as an amotivational twenty-two year old slacker, my parents care for me. I felt terrible for John and stressed for the situation he was in. It was harrowing to think that there are many young people in very similar situations who often can only wait helplessly as their parent drinks themselves to death.

For the first ten minutes of this movie, I thought it was going to be a pretty standard European social realism picture. There’s nothing inherently wrong with that; I’m the rare person who enjoys quiet, profound moments on film more than high-octane action and stuff blowing up. But initially the movie set itself up to be pretty ordinary, at least as far as films in the genre go, with a grim council estate backdrop and a lot of lingering shots of people lying on unmade beds and long periods of sullen silence.

If you’ve seen a lot of social realism films, you know the drill. However, I can definitely say that this movie surprised me with it’s complexity and it’s habit of taking it’s plot in unexpected directions. At the very least, it will make you feel better about your own mother. There’s an honesty and subtlety to the script that I appreciated, choosing to let events unfold in a raw and realistic manner instead of going for cloying sentimentality and the ubiquitous Hollywood ending.

An intensely emotional movie that is often hard to watch due to it’s stressful subject matter, Glassland takes up the subject of dependence and the unconditional love of a son for his perennial screw-up mother, who can only love selfishly and in small fits and bursts, in a personal and disturbing manner.

The ending is both a happy one and a sad one, remaining somewhat open-ended while offering a tiny trace of hope in a incredibly bleak urban landscape. I recommend that everyone with an interest in small, powerful films check this movie out, although it might be extremely difficult to watch for some, particularly for those for whom the themes are close to home. I would definitely like to see the director, Gerard Barrett, do something new of the same high quality. 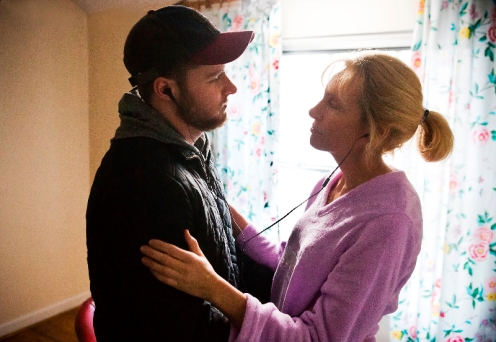