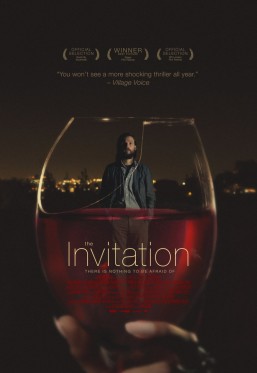 Rating: C+/ Why don’t they just leave? That was the question plaguing my mind as I watched The Invitation, a indie thriller sporting a scant premise that goes on at least twenty minutes longer than it should. When a guest at the dinner party from hell finally tries to get the fuck out of there, I idly wondered why someone didn’t get that exact same idea like half an hour ago. The cringe factor is high, but the film itself is a little bit dull and the payoff unrewarding, despite some great performances from the little-known cast of talented actors.

Will (Logan Marshall-Green) is a troubled man reeling from the much hinted-at loss of his young son who takes his beautiful girlfriend Kira (Emayatzy Corinealdi) to his ex-wife (Tammy Blanchard) and her new husband (Michiel Huisman)’s lavish dinner party. That situation in of itself offers lots of room for awkwardness, and the incident of Kira and Will hitting a coyote on the road and Will having to put it out of it’s misery with a tire iron sets the eerie mood for the events to follow.

When Will gets there, he notices his ex, Eden, is acting kind of weird, and her guests begin acting in a increasingly sinister manner. And that’s before Eden and her new hubby, Dave, show Will, Kira, and a few as-yet uninitiated guests a video of a dying woman being ‘released’ from her pain. As Will is gaslighted and dismissed as irrational and insane by the people around him, he begins to realize that the reason for Eden bringing all these people together  might be darker than he had originally suspected.

I had high hopes for this movie, which might have been my first mistake. It just kind of drags on and on, and a movie that’s considerably lengthier than it should be only works if it has something particularly special going for it, like characters you care about. Frankly, I wasn’t attached to any of the characters, nor did I find them psychologically intriguing on any meaningful level. A lot of the conversation is neither particularly interesting or significant to the story and could have been cut out without detracting much from the movie itself.

Similarly, the violent denouement of the film does not pin you to the edge of your seat, and I guessed the story’s big reveal about twenty minutes in. As a result, actually getting there was kind of a bore. As I said before, the actors do their best with the material their given, and Logan Marshall-Green as Will makes a genuine effort to rise above his underwritten character. This guy has star potential, portraying Will’s brokenness and grief beneath his quiet, bland exterior, and he should (and probably will) end up playing in films much better than this one later in his career. The grief aspect over the loss of a child is what this film excels at. But ultimately The Invitation is a thriller, and the plain and simple fact of the matter is that it doesn’t thrill much at all; in fact, there are times when it barely provokes interest at all. As a result, while it’s not a terrible movie, it is also perfectly missable 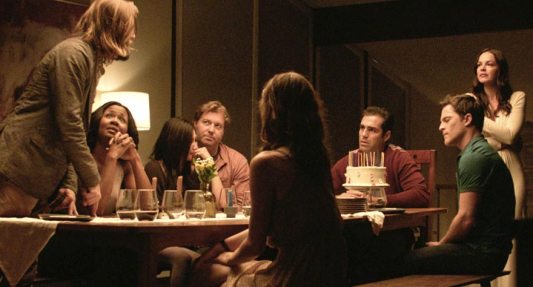