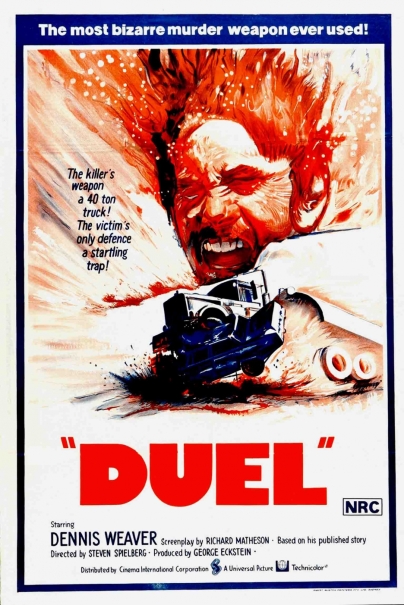 Rating: B/ Steven Spielberg’s feature film debut is a high concept thriller focusing on the world’s worst case of road rage leaving a man fighting for his life. Essentially two people (one almost entirely unseen throughout the entire film) and one long car chase, with a few intermittent breaks for the introduction of a few new minor settings or characters, Duel is the mostly compelling story of the worst day of a man’s life. It doesn’t have a huge budget, and you don’t entirely care what happens to the smug protagonist, but the use of clever cinematography and Weaver’s tense performance cut past the budget restraints and the viewer’s lack of sympathy for the main character.

David Mann (Dennis Weaver) is a self-absorbed nebbish who is in a real hurry to meet up with his boss and discuss something important before the boss leaves town for a few weeks. After arguing on the phone with his shrewish wife (Jacqueline Scott,) Mann tries to make his appointment, mindlessly cutting off a monstrous-looking big rig on the highway. His small transgression leads to a full-blown pissing contest between the two men in their vehicles (although the truck driver is never seen except for an arm sticking out of the window and an occasional cowboy boot,) and ends in the enraged truck driver trying to run Mann off the road.

Mann goes about his business, trying to shake the harrowing experience off, but soon he learns that the truck driver is not going to give up so easily. Driven out of his mind by unknown factors, with Mann rudely cutting him off being the proverbial straw that broke the camel’s back, the unseen truck driver decides to make his eye sore of a big rig the last thing David ever sees. His annoyance now turned to fear, David finds that a man he didn’t know until like an hour ago and whose face he has never seen will not stop until he is dead, and the mystery of David’s pursuer takes on an almost supernatural intensity as they approach a final, climactic confrontation.

It sounds like kind of a slim premise for a 90-minute movie (the screenplay having been adapted from a Richard Matheson short story by Matheson himself,) and it actually kind of is, but it still somehow seems to work, telling a story that seems extreme but nevertheless kind of plausible, especially when you see the crazy incidents of road rage that sometimes occur worldwide. I think it would have been interesting to see another film from the point of view of the truck driver; I mean, how do you get driven so out of your mind that you will go to any lengths to kill a complete stranger? The mood of paranoia and anxiety is well done.

This might not be high-octane film you would expect when you compare it to a modern-day thriller with twice the budget and a couple of A-list actors kicking the living shit out of random goons. There’s hardly any actual violence, at least not of the physical, slice-em’-and-dice-’em kind, though there is a sense of menace that looms over the film. It’s not a great movie, partially because it fails to let you in emotionally, placing a character you want to slap in the forefront of the action.

But it’s smart film for sure, about 100x smarter than you would expect for a movie that is low on dialogue and heavy on vehicles chasing one another. It knows that what we can’t understand terrifies us, and it places a big, fat unknown in the most unlikely place; behind the wheel of a big rig. Is the trucks owner just a guy fed up with the unfairness of the world? Or is there something about him that is not entirely human, his tenacity, his silence and unwavering hostility, all of which are ratcheted up to extreme heights? Duel certainly keeps you wondering, and should have something for everybody. And it might teach you an important lesson about being courteous on the road and not trying to cut in front of trucks that are three times the size of your vehicle and might be able to go faster than you think, should they decide to retaliate.