Rating: B/ A film about bicycling might seem like a odd choice for someone who’s never gotten past peddling up and down the road on their bike as a small child, but I’ve always said that for me a sports movie is only as good as it’s characters and bigger themes. I have literally zero interest in sports or anything physical (as you’d be able to tell from my decidedly lumpy physique,) but luckily, Breaking Away is made up out of all the things in life; coming of age, romance, family, relationships… sure, it’s a little bit corny watching it now, but there’s so much more to this movie than the protagonist’s obsession with biking, a fixation that, like his fascination with everything Italian, only seems to grow over time.

Recent high school graduate Dave (Dennis Christopher) is a kid with an infectious smile and a upbeat manner who, as I said before, has two great loves of his life- Italy and bicycling. He lives in a small dead end town in Indiana and hangs out with his slacker friends; intense troublemaker Mike (Dennis Quaid,) goofball Cyril (Daniel Stern,) and Moocher (Jackie Earle Haley,) a small guy who really doesn’t like to be called ‘shorty.’ The boys are called ‘Cutters’ because they have no interest (or more accurately, no money) to go to college, and they are in the midst of a really childish rivalry with a group of college kids led by Rod (Hart Bochner.)

Dave starts romancing a pretty college student (Robyn Douglass) under the false pretense that he is an Italian exchange student, but what he doesn’t know (or pretends not to know) is that she is Rod’s girl. Most of the movie focuses on Dave’s relationship with his father (Paul Dooley,) who doesn’t even try to understand his son’s dreams, and his preparation for a big race which could make or break him. He also struggles to keep up the pretense that he is Italian, while his friends struggle with their own individual dramas.

What the filmmaker comes up with here is nothing particularly new and riveting, just a quietly touching chronicle of boys being boys and grappling with impending adulthood in a stifling small town where everybody knows everybody, for better or worse. I think the dad could have been fleshed out a bit more, his constant outright hostility toward his affable son was frankly baffling, and not applied with a lot of subtlety. Dave’s mother (Barbara Barrie), on the other hand, is kind-natured and chilled-out, in contrast to her husband’s hair-trigger temper. Most of the characters in this movie feel very real; unextraordinary, but not in a bad way, but in the sense that you’re like. “I could know this person.”

Mostly, Breaking Away is a good watch for gloomy days when your outlook is bleak and you just need to rewatch something fun or life-affirming. It’s a trifle obvious, with a predictable ending and not a lot of room for nuance in the development of  the relationship between father and son (we know pop will come around some time, probably right in the middle of the big race, and the movie doesn’t surprise us on that account or many others,) but it’s well-acted and like Dave himself, maintains a sunny attitude about things even when the going gets rough.

It’s a movie that makes itself easy to like, and it’s ultimately more about the coming of age process all people must go through than bikes or sporty activities. In the end, Dave surprises everyone; his parents, his friends, the citizens of his small town, and along with exceeding their expectations, he also ekes out a future for himself that doesn’t involve working in a factory or selling used cars. That’s where the real ‘breaking away’ lies, from shitty expectations, from the limitations friends set for you, and from a town that just doesn’t have that much to offer to it’s citizens. The miracle of Dave’s character is that he refuses to become resentful of the people in his life, because while they tend to drag him down somewhat, they also help him grow up into a successful, happy young man. A film of small moments, Breaking Away has a way of sneaking up and surprising you. 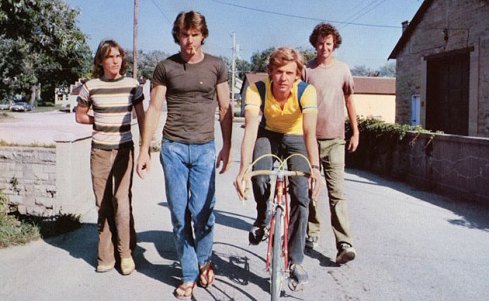