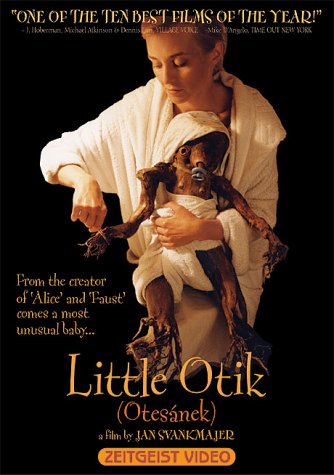 Rating: C/ I remember when I was about eleven, I saw a trailer for a Jan Svankmajer film called Lunacy, which involved dancing pieces of raw meat interspersed with people screaming/ being tortured. It scared me quite a bit, and left me with no desire to see the entirety of the movie. Indeed, Svankmajer is one of those filmmakers, like David Lynch or John Waters, who seems to absolutely pride himself at being weirder than everyone else. After I saw Alice, his supremely creepy take on Lewis Carroll’s Alice in Wonderland, I was curious to see what other screwed-up little creations he had cooked up in his twisted brain.

Svankmajer is a Czech filmmaker whose medium is claymation juxtaposed with some live-action characters and sets. In Little Otik, this woman (Veronika Zilkova) really wants to have a child, but both she and her husband (Jan Hartl) are barren. To ease his wife’s sorrow, the husband builds her a baby built out of wood with eerily chiseled features, including a small wooden weenie sticking out appropriately between the legs. Cute right? Er, not so much. To the man’s horror, the lady, Bozena, treats the piece of wood like a living child. Pretty creepy, you say? You haven’t heard the half of it. What the poor guy didn’t count on was the slab of wood coming to life- and having a ghastly appetite that can’t be satiated by human food.  How permissive can you be when Baby has a taste for human flesh, and just one mailman simply in’t enough.

As the body count increases, the creature finds an unlikely friend in a neighboring girl (Kristina Adamkova) and  Bozena can’t bear to leave behind her responsibilities to her monstrous child. To say this movie is strange would be an understatement. The cries and general behavior of the ‘child’ are incredibly creepy and it’s hard to say there’s a single character worth caring about. The husband is an ineffectual loser and the wife is out to lunch. I was similarly put off by a subplot featuring a geriatric pedophile (Zdenek Kozak)  following the small girl around, which added absolutely nothing to the story. Do we really need a close-up of the girl’s underwear clinging to her buttocks as she leans over and the old pervert creeps almost cartoonishly toward her, arms eagerly outstretched? Than we have a scene where the girl uses her body to lure the old man in a mad grab to achieve her own ends. Yuck.

Little Otik is just over two hours, but I found that the novelty of the film ran short after just forty minutes. Ho-hem, the creature gets out, it eats people, the thing’s ‘mommy’ waffles around the carnage like the blathering idiot she is. I’m unsure of whether the movie was supposed to be a black comedy, a horror movie, or a gruesome fantasy. We seem to be getting a commentary of some kind on decadence; as little Otik (as the monster comes to be called) munches on multitudes of people we get imagery of people eating disgusting food with the remnants dripping grotesquely down their chins.

I understand that this film ties in with a very old fairy tale, but I don’t understand what about it is supposed to keep our attention for just over two hours. Little Otik has parallels to David Lynch’s Eraserhead, both involve a father who must contend with his monstrous child, and the paternal anxieties that come with this Hellish reckoning, but you’re better off watching Lynch’s nightmarish cult classic. Amateurishly acted, Little Otik feels like a cartoon, and not a very funny one.

It’s best if animal lovers stay away from this one too, there’s grievous violence inflicted against a blameless family cat. The only thing I can say I really liked about Little Otik was the animation of the titular character. Besides that, I was really just incredibly underwhelmed. And yes, I like ‘weird’ and ‘edgy’ flick just as much as the next gal. Probably even more. I will also admit that the pedophilic content may have affected my rating somewhat, and there might be many people for which this is the perfect movie. Just not, apparently, me. I was not feeling the love for Little Otik, which is a shame, because it has the makings to be a good dark comedy. I just don’t see how anyone could find the finishing product particularly funny, or good, for that matter.