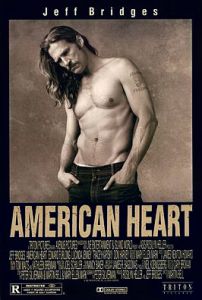 Jack really doesn’t want much to do with his jaded yet impressionable teen son, but Nick butts into Jack’s life after Jack is released from prison, where he has been incarcerated for bank robbing. Jack aspires to make an honest living, but raising Nick  isn’t part of the plan- and Nick soon falls in with a group of disaffected punk kids, including child prostitute Molly (Tracey Kapisky.)

Jack is helpless, hopeless, incompetent at truly being a father but capable of the persistent wish for his son to do better… to not screw his life up as badly as his old man. As Nick sinks deeply into questionable company and petty crime, Jack makes one last effort to be a father not worth being ashamed of.

There’s an admirable amount of development of Jack and Nick’s characters throughout the film. Initially, Jack came of as a pathetic loser (the first thing that occurred to me while watching him- uncharitably- was ‘you can take the trash out of the trailer, but you can’t take the trailer out of the trash’) but you get a sense by a certain point in the movie that he’s still a mess but he’s… well, trying, maybe not always succeeding, but making an actual effort all the same.

In many ways “American Heart” is a doomed (platonic) love story between father and son. Theirs is a complicated, fraught, relationship, but touched by love nonetheless. The romantic relationship between Jack and a woman who wrote to him in prison who he fancies (Lucinda Jenney) is a featured plotline but it seems insignificant compared to the meat and bones of the story- Nick and Jack’s relationship as Jack struggles to make ends meet washing windows in Urban Seattle.

I think this is now my favorite Jeff Bridges role (yes, it even beats out his part in “The Big Lebowski,” an overrated movie if there ever was one.) He is understated and effective in this movie, and Edward Furlong backs him up nicely as his frustrated teenage son. Although “American Heart” is grimy and tragic, it also feels very real to a large extent. It sheds light on a side of life many people experience, and which the comfortably middle class and reasonably functional shudder to think of or even vicariously find fascination in.

If there’s any fault to be found in this movie, it’s in the relentlessly grim depiction of just about everything. But that’s okay, because it works, but moviegoers should know this isn’t a saccharine drama where a father and son bond to a sappy orchestral soundtrack. It’s rough. It’s raw and it stings like a fresh wound. But on the upside, when Nick makes it to adulthood, if he makes it at all, I see a best-selling tell-all memoir in his imminent future. All that childhood pain has to make it to some use, I figure.