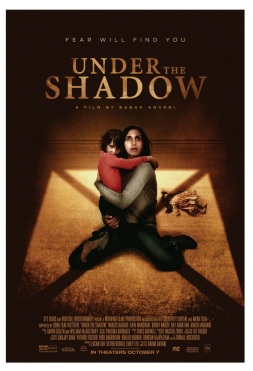 Rating: B-/ I know literally nothing about the history of the Iran-Iraq conflict, but this movie was compared by certain people to Pan’s Labyrinth and The Devil’s Backbone, two movies with which it was not necessary to understand the political and social context. I came into this movie with high hopes, but personally I don’t think it measures up to Guillermo Del Toro’s two masterpieces.

Under the Shadow is a good movie, with a few effective jump scares, but it’s certainly not unforgettable. One of the problems this movie has is that in trying to balance it’s social commentary with it’s horror elements, the supernatural aspects often go neglected, and when they’re brought in, they tend to be disappointing, consisting mostly of false start dream sequences and the film’s heroine running around screaming at the top of her lungs.

With her husband Iraj (Bobby Naderi) called in for mandatory military service, Shida (Narges Rashidi) is left with her young daughter Dorsa (Avin Manshadi) in her apartment in war-torn Tehran. Before Iraj’s departure, he and Shida have a big fight about him not supporting her dreams of becoming a doctor, and the two part on bad terms. Shida does not adjust well to being the primary caretaker of a demanding child, and she becomes more and more frustrated and short-tempered. When weird things start happening in their apartment and Shida’s kooky neighbor suggests that their home might be possessed by a djinn, Shida dismisses such claims as nonsense. But as life at home becomes more unbearable, Shida realizes that she might have more to fear than the missiles the Iraqis are dropping on her city.

The acting in this movie was good, including the child actor, but I felt the story left some unanswered questions that were very frustrating. For example, there’s a creepy little boy with a glare that rivals Samara’s from The Ring who is living next door to Shida with his aunt and uncle, after the untimely deaths of his parents. The kid is allegedly completely mute but seems to speak to both Shida and Dorsa, and tells Dorsa that her apartment is haunted. The viewer never gets any explanation for this, and the little boy is taken out of the story as quickly as he appeared. The film also ends on a frustratingly abrupt note, leaving the fate of the characters somewhat open-ended.

I thought that certain scenes in this movie were tense and scary, just not nearly enough. I didn’t think the filmmaker balanced the supernatural horror with the political turmoil evenly, and the paranormal elements were often lost in the shuffle. I got tired of the main sources of terror being excessively used ‘was she dreaming?’ fake-outs and a hovering blanket-like entity. There should have been a final boss more frightening and convincing than a flying blanket monster, and one can be forgiven for giggling at the final conflict.

There were many aspects of Under the Shadow that I liked, and the themes pertaining to motherhood and Shida’s growing frustration with her needy daughter reminded me of another good psychological horror movie, The Babadook. However, although this film had my attention from beginning to end, I didn’t sympathize with Rashidi’s character, Shida, the way I sympathized with Essie Davis’ character in The Babadook. Shida seemed excessively harsh with her daughter from square one, and her sanity seemed to be deteriorating early on, so that there wasn’t far for her to fall into outright hysterics.

I think the filmmaker had an excellent idea for a film, but I think the final product could have been better. I enjoyed Under the Shadow, but overall I was underwhelmed by the lack of substance. If a horror movie is going to be slow-paced, it had better compensate with a hell of a finale. The end of this film left me not gasping for breath, but simply saying “That’s it?” while the credits rolled. Under the Shadow feels at times like half a movie, and the feeling of incompletion is frustrating, because there is so much good stuff here that should have been elaborated on. 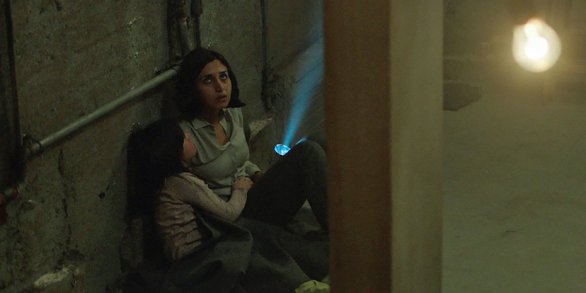