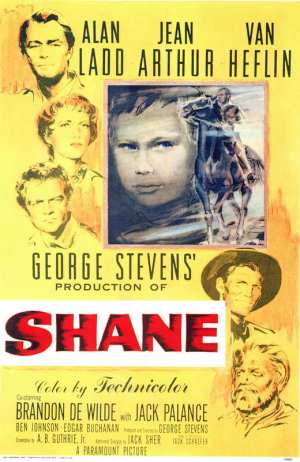 Rating: B/ There are some people who come unexpectedly into your life and, for better or for worse, change it forever. This is the case  for Joey Starrett (Brandon De Wilde,) the young son of homesteaders Joey Sr. (Van Heflin) and Marian (Jean Arthur,) who is blown away by the arrival of a mysterious gunfighter and drifter, Shane (Alan Ladd.) Shane embodies all the qualities that Joey Jr. is endlessly impressed by and wants to emulate, and Shane changes the lives of the entire family as well as the community at large when he butts heads with some landowners who are trying to get rid of the homesteaders by any means necessary, led by lead baddie Rufus Ryker (Emile Mayer.)

Over the last few months, I’ve made it my prerogative to watch more Westerns, which as a kid I irrationally avoided at all costs. I thought I had seen parts of Shane at one time or another but I didn’t think I had ever seen the whole thing. So a couple of weeks ago I watched Shane beginning to end, and my Dad was all too happy to watch the whole thing with me. Shane gives you a taste of a different time in a homesteader’s town in the old west, where everybody has to pitch in and work really hard together if they want to keep their little patch of earth cultivated and growing strong.

I guess the difference between this and a lot of other popular westerns is that there isn’t a whole lot of violence or action going on here. Also, Ryker’s motivation actually makes sense, although he is going about fixing his problems the wrong way. The homesteading families are actually living on his stretch of land and making harder for him to get access to the only water source for miles.

Sure, he’s kind of an asshole about it, and the homesteaders are working their butt off to keep the home fires burning, so to speak. So it’s not like  they’re lazy or freeloaders. But honestly, who wouldn’t be just a little pissed off about it? The reason for the villain’s bad behavior makes me remember the quote, “Every villain is a hero in their own mind,” and makes the central conflict of the movie less of a cartoon, although it doesn’t help the seriousness of the film that there is a big  dramatic drum roll whenever the bad guys show up that reminds me of Scut Farkus in A Christmas Story. If there was ever a way to make the audience know prematurely that the villains were coming before the camera even zeroed in on their sneaky beady-eyed faces, they found it.

I had never seen Alan Ladd in anything before I watched Shane, or at least I didn’t recognize his face upon seeing him, but he radiates cool as the eponymous character. You can see why little Joey likes him so much and practically wants him to be his Daddy, although Joey already has a Daddy who is a cool guy in his own right. Ladd’s protagonist is a likable character, though on the surface he really doesn’t seem to exhibit much emotion, and his faithful, taciturn protectiveness of the Starlett family is touching.

The kid is a little bit on the annoying side at times, but his presence in the film kind of works at the same time. Kids can certainly bug you, and Joey Jr. is no exception. He manages to be both likable and an annoyance at the same time, which isn’t unusual for a nagging hero-worshiping small town kid. But we like that Shane puts up with him, and we put up with him too. Due to the child actor’s effeminate manner and inflection, I would love to know if Brandon De Wilde grew up to be gay. His adoration of Shane, coupled with his feminine manner, seems to go beyond hero worship territory and into the realm of a little crush. But I desist.

If you like low-key Westerns that kind of get you inside the rhythm of the world they create as opposed to high octane shoot-em-ups full of gun smoke and shoot outs, this is the movie for you. It’s quiet and thoughtful, with gorgeous cinematography and interesting observations on it’s characters. All I know is that now I definitely want to get my hands on the book version, the experience  of watching the movie made buying the novel seem worthwhile. Westerns aren’t generally my thing, but this is a good one. It’s definitely a classic worth checking out.