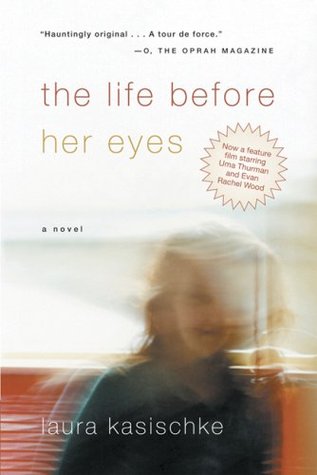 Rating: B/ Considering that I had already seen the excellent film adaptation a few years before, this novel held few surprises for me, least of all the twist ending alluded to in it’s lyrical title. So it’s a good thing that Laura Kasischke focuses more in her writing on lyricism and less on plot. With the lovely, vivid writing, I still felt like I was getting something new out of the experience of reading the book even though I pretty much knew the story. The Life Before her Eyes is a good book, not a great one. The writing can be meandering and sentimental while at the same time being lush and gorgeous, starting off the bat with a Sophie’s Choice type situation and gradually touching on aging, sorrow, and regret in a bittersweet manner.

Diana McFee is a beautiful, passionate, and somewhat loose teenage girl who maintains a surprising friendship with the pious born-again Christian Maureen. One fateful day, Maureen and Diana are in the girl’s bathroom of their high school when a unhinged shooter bursts in with an assault weapon and makes Diana choose between her life and the life of her friend. Many years later, Diana has made her choice and is living out her dream with a successful professor husband and a bright young daughter. But is there really any kind of real coming back from a tragedy as devastating as the one Diana suffered? Consumed by memories and barely concealed sadness, Diana is confronted by a series of strange events that make her question the reality of the ‘perfect life’ that seems so readily offered to her.

The Life Before Her Eyes juxtaposes flashbacks featuring Diana and Maureen’s high school days with scenes of modern day Diana grappling with a series of sinister events. If you’ve read anything by Laura Kasischke, you pretty much know what to expect- less emphasis on plot and characters and major emphasis on gorgeous writing with a plethora of intriguing and thought-provoking metaphors. I was sometimes a little bored with grown-up Diana, who seemed a bit bland and self-righteous (not even bland in that she was an unrealistic character, just one I didn’t have much patience for.) I definitely preferred teen Diana, and her relationship with Maureen is much more interesting than her adult life, which we are told again and again, is outwardly ‘perfect,’ but haunted. At least the scenes of Diana’s adult life start to get more interesting when they acquire a nightmarish edge.

The writing in this book is truly beautiful, if you can get past occasional self-indulgent passages about birds and flowers and things. It’s not plot-driven fiction, so it’s better suited to people who appreciate lyrical writing and aren’t in a huge hurry for something earth-shaking to happen every few pages. I’m not the most patient reader in the world, but I enjoyed it. I actually might have liked the movie better, as crazy as that might seem. The relationship between the two girls hit a little harder in the film adaptation. I really like Evan Rachel Wood too (why does it seem like she’s not in anything anymore?) But if you watched and enjoyed the movie I definitely recommend the book as well. Some of the changes in the movie were for the better (like the exclusion of the bewildering and unnecessary epilogue) but the movie stays mostly true to the book and I hope you get a chance to check out both.