Rating: B-/ Flaws aside, I don’t think this movie is as bad as the critics say. Sure, the characters are fairly unlikable and the plot twist doesn’t hold up to close scrutiny, but I was invested throughout the entire film in what was going to happen next (which is strange, since the lead character actually kind of annoyed me.) Plus, I love Charlize Theron, no matter what kind of fucked-up head case she’s playing (take the Oscar-winning crime drama Monster, for example. ) END_OF_DOCUMENT_TOKEN_TO_BE_REPLACED 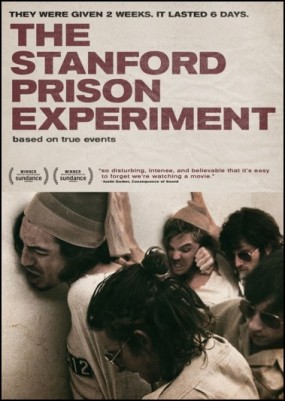 What happens at Stanford, stays at Stanford. Just when you were starting to feel good-ish about humankind, a movie like this comes out and reminds you what dicks we can be. It’s an important lesson, if not a pretty one, that for some people, the adrenaline rush of power for the sake of power is enough to make them do pretty much anything.

In 1971, real life psychologist and sociologist Philip Zimbardo (played here by Billy Crudup) put out an ad in the paper offering $15.00 a day for male college students to be participants in a social experiment. On paper, it seemed like an easy way to make money. The boys were screened for any psychological and health problems and instructed to play ‘guards’ and ‘convicts’ in a faux prison environment- the basement of Stanford university.

The experiment would serve as a commentary on the dynamics of a environment where guards were given some degree of power over prisoners, and question whether the penal system is more detrimental than it is beneficiary. The ‘guards’ were not allowed to hit the ‘prisoners.’ he ‘prisoners’ were safe in a controlled, essentially benign (if creepy and weird) environment. At least that’s what they were told. If you know anything about the real-life scenario that inspired this movie, you may be aware of how fast the shit hit the fan.

Most people who assume that the reason prisons get so out of control with riots and mishaps and guards and convicts kicking the crap out of each other is (a, we aren’t exactly dealing with regular people in these criminals, and criminals, as we know, can have propensity for violence and (b guards are less likely to view men or women who have committed illegal acts as human and deserving of good treatment. It’s the same psyche as conservatives who complain that prisons are ‘too good’ for convicts. They screwed up, right? The should be paying the price. One bread-and-water meal a day and hard labor all the way, baby!

But these were regular college students. They had no criminal record, no prior psychological challenges, no reason to hate or despise each other. That’s why it came as such a surprise to Zimbardo when one of the youths Christopher Archer (Michael Angarano,) took charge in the worst possible way. Adopting a persona he learned from “Cool Hand Luke,” Archer coerced his fake prisoners and twirled his nightstick (why did they give them nightsticks anyway?) occasionally stopping his twirling long enough to beat someone senseless.

Zimbardo, fascinated with the monster he had created, allowed the experiment to go on far longer than it should have, even after two ‘prisoners’ (Tye Sheridan and Ezra Miller) suffered nervous breakdowns. Like the omnipresent Big Brother, Zimbardo watched the youths operate with a hidden camera, and later wrote a book about how ‘regular’ people can be convinced to commit unconscionable acts though mob mentality, ‘The Lucifer Effect,’  which later became this movie.

I watched this movie convinced of two things, 1., that Christopher was an undiagnosed sociopath (he smiles glibly and rattles off his stupid “Cool Hand Luke” accent even when the ‘experiment’ becomes a hostage situation) and that 2. Zimbardo was probably a latently homosexual sadomasochist, achieving a hard-on at the mere mention of defrocked boys being slammed against walls. There is an often-seen look on his face as he watches events unfold that goes beyond the realm of scientific curiosity and into flat-out arousal.

It is only when actual sexual degradation is achieved that he has a change of heart and cancels the experiment. But before that: boys forcing other boys to defecate in buckets and being locked in the dark, claustrophobic ‘Hole’ (kind of the real life version of Roald Dahl’s ‘The Chokey’)- all okay.

“The Stanford Prison Experiment” is a stimulating watch that should be viewed by sociology students and people interested in the human mind. The whole cast is good (with the possible exception of Olivia Thirlby as Zimbardo’s much-younger girlfriend, who didn’t impress me) and it achieves a kind of slow-burn as the situation gradually becomes a swirling shit-storm of unintended consequences.

I do think the film was a little long at just over two hours (perhaps it could have been cut down by ten minutes or so.) If ‘Lord of the Flies’ interested you on a psychological as well as a literary level, and you are interested in apparently normal people acting in group mentality and doing awful things that wouldn’t otherwise be carried out with a clear conscience, this is the movie for you. It’s not a horror movie. It’s barely even a thriller. Just a crazy real-life story about impressionable college kids going absolutely apeshit in a secluded environment. In Stanford, where no one can hear you scream… It’s a movie best left for a certain audience, but a worthy watch all the same. 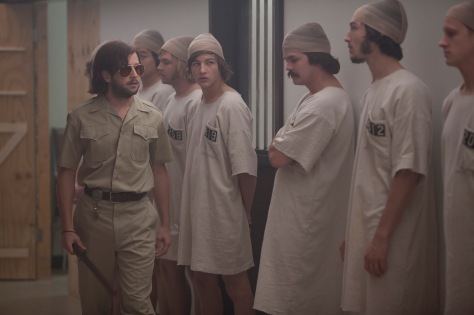 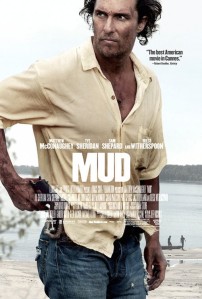 “Mud” is director Jeff Nichol’s third feature following the intriguing ‘crazy… or not?’ rural thriller “Take Shelter.” As impressive as “Take Shelter” (and Michael Shannon) were, I think “Mud” trumps it, delivering an arresting and fascinating plot that is, above all, I think, a coming-of-age story. Young Ellis (Tye Sheridan) lives alongside the Mississippi River in a boat with his quarreling parents (Ray McKinnon and Sarah Paulson.) The boat is in danger of being taken down for complicated legal reasons, and Ellis must contend with both the possibility of losing the only home he has ever known and the disintegration of his parents’ marriage.

Ellis’ best pal is Neckbone (Jacob Lofland,) and the two go on adventures that us overprotected Suburban kids can only dream of. They take a boat down the river and to a island, where a storm has tossed a boat in a tree. “This is our boat,’ they declare, as they climb the tree and into their new abode. Turns out the tree and boat are already occupied- by a man called Mud (Matthew McConaughey,) an eccentric loner on the run from the law. Mud needs food- and the more idealistic Ellis complies, while Neckbone keeps his distance.

Mud professes his love for Juniper (Reese Witherspoon) to the boys, and Ellis is sucked in by his tale of chivalry and true love, and decides to help him. But Ellis soon realizes that relationships are a lot more complicated than he had first assumed, and this is mirrored by his attempts to engage the interest of pretty yet fickle teen May Pearl (Bonnie Sturdivant.) Growing up is hard. But when you’re fighting for your life (as Ellis soon is when men come looking for Mud,) there isn’t a lot of room for mistakes.

Yes, McConaughey is great here, but I think the main kudos belongs to Tye Sheridan as Ellis. Together Sheridan, and the director, propel this film past common coming-of-age territory.  One asset is the unique setting of the film. I’ve been on these roads, I’ve seen these landmarks. Okay, not literally, but I live in a similar area, a place that, similarly, would not generally be portrayed in the movies. A hundred times I’ve gotten a snack or a soda from a gas station identical to the one’s in this town.

“Mud” has a feeling of gritty realism without ugly attempts to make Southerners into nasty toothless pieces of human waste. The characters are three-dimensional and sympathetically wrought; there’s a certain complexity that fits with the boy, Ellis’, increasing awareness of the adult world.  I simultaneously felt jealous for Ellis’ childhood of freedom and closeness with a best friend and worried for him as he navigates difficult social mores, hits emotional milestones and is actually physically endangered at times. Life’s not easy when you’re a plucky teen who’s better at getting into fistfights than getting out of them.

The whole cast is great here, and Michael Shannon, who was brilliant in “Take Shelter,” features again as Neckbone’s Uncle Galen, a shameless bad influence.  We don’t live as far down South as Ellis and his family and friends so I missed the chance to be named ‘Neckbone’ or ‘Mud.’  What a pity.

I can’t help being reminded of the 1999 English film “A Room For Romeo Brass,” a movie about two undersupervised kids who fall in with a shady man with a dynamic personality. Both start similarly but end quite differently, as “…Romeo Brass”‘s eccentric adult companion turns out to be all kinds of crazy. I highly recommend both as looks at a most unusual male adolescence.

“Mud” is a compelling watch that becomes a mite implausible in the end stand-off. This didn’t bother me particularly because it is, after all, a movie.  Matthew  McConaughey uglifies for this role (what is  with that buck-toothed thing he does throughout?) and proves, once again, he is not just a pretty face. Tye Sheridan is thoroughly captivating in the lead role. I hope to see more of him shortly. A good way to spend 2+ hours. 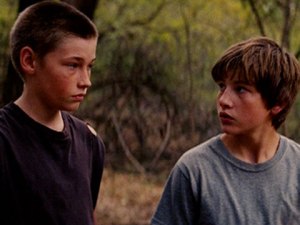