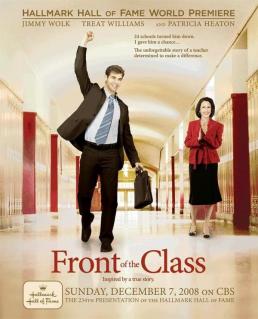 There are undeniably touching moments in “Front of the Class,” but from the ‘Ah-Gee’ musical score to the sappy voice-over, the periods in between are more frustrating then inspiring.

The effectiveness are the story is very subjective- if you like Hallmark Hall of Fame television movies and unabashed tearjerkers, you will find a lot to love in this story of a young man living with Tourette’s Syndrome while struggling to achieve his dream of becoming a teacher.

If not… well, you may be a hard-hearted cynic like yours truly. Have you ever felt like a robot? Like you weren’t capable, or even deserving of, empathy? I watched this movie in a sparse classroom of four students (besides myself,) and by the end credits all four (and the teacher) were weeping and disheveled.

And me…? As for myself, the movie hadn’t squeezed a single tear out of me. But before I could snarl and say “Bah-Humbug,” the teacher turned on the lights and began raving about what an amazing film it was. What was I supposed to say? Could I say anything?

I guess the whole thing was a bit too calculated for my taste. Or maybe I just don’t have empathy for nice, clean-cut white Americans. Or Something. Nevertheless, the experience left me feeling confused and alienated.

At the age of six, Brad Cohen (played by Dominic Scott Kay as a child and James Wolk as an adult) starts to experience mysterious tics- grunts, yelps, and sounds that puzzle his teachers and his family. His classmates, on the other hand, laugh and poke fun at his strange behavior.

However, most heart-wrenching for Brad is the frustration and embarrassment of Brad’s father, Norman (Treat Williams.) Although Brad’s dad and teachers are convinced that he’s a toublemaker, Brad’s mom Ellen (Patricia Heaton) loves him and is determined to find the source of his problems, which lies in the fateful diagnosis of Tourette’s Syndrome, a neurological disorder which causes tics and twitches against the sufferer’s will.

After experiencing the support of a childhood principal (Mike Pniewski,) Brad grows up with a dream to teach… a dream he never lets go of, through crushing rejections and devastating failures. Will he succeed? If you don’t know the answer to this, apparently you’re not familiar with this type of movie.

Anyway, the stand-out performance here is Dominic Scott Kay as the young Brad Cohen, who wins our sympathy as good kid struggling with events outside his control. Patricia Heaton is also very good as his devoted mother, while James Wolk is decent (if a bit too overly earnest) as the grown Brad.

Although the portrayal of Tourette’s is realistic and may appeal to sufferers of the condition looking for support, the so-so script weighs the movie down in a way even the decent cast can’t make up for. The movie is just too sentimental for it’s own good. Which is a shame, because there are some good things on display here.

“Front of the Class” is the kind of movie that might be worth watching if it comes on Hallmark, but isn’t worth your time or money to buy or rent IMO. If you have Tourette’s it might offer more to you than it did to me. In that case, or if you like Hallmark tearjerkers, ignore this review and have a good cry on me. Otherwise, you may want to skip this one. Just sayin’.