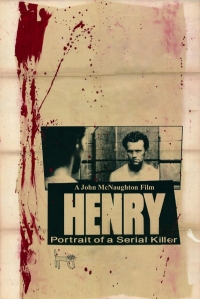 Rougher, rawer, and realer than other horror-killer films of it’s ilk (“The Silence of the Lambs,” “Seven,”) “Henry: Portrait of a Serial Killer” engaged me from beginning to end. Beware- people who don’t want to see the dark, dark side of the human psyche should stay far away from this innovative low-budget classic. The titular serial killer of the title (played by Michael Rooker, who many will no as Daryl Dixon’s no good brother Merle) never stays in one place for long, and the film follows in startlingly true-to-life style as he stays for a while at the home of his worthless white-trash friend Otis (Tom Towles,) and Otis’ sister, Becky (Tracy Arnold.)

(Somewhat) innocent Becky just came out of an abusive relationship and is suckered in immediately by Henry’s sad story, but Otis has less-than-brotherly feelings for his attractive sis. So follows a plunge into darkness, as Henry initiates Otis into his homicidal lifestyle, while Becky, not fully aware of the extent of Henry’s crimes, only falls harder for the taciturn killer.

“Henry- Portrait of a Serial Killer” is extremely creepy with natural-looking actors who are convincing in their roles. There certainly aren’t a lot of sympathizable characters (Becky is ultimately the only one you’ll feel anything for,) but I ended up thinking that Otis was even worse than his murderously inclined buddy. His unscrupulous intentions toward his sister were less than savory, and although he didn’t initially kill anybody, he sure took to the pastime (with Henry’s mentorship) like gangbusters.

Obviously a low-budget movie, this movie actually uses that to it’s asset, and it provides it’s most harrowing scene on home video as something that Henry and Otis have shot on their expeditions. The weird sound effects and general eeriness reminded me of “Angst,” another discomforting movie from the 1980’s which is hard to find on DVD. The ‘bad mama’ trope is a little cliched (the serial killer genre’s take on the refrigerator mother,) but being that it’s true to the events this was based on, I didn’t sweat it too much.

I personally didn’t find this movie too disturbing and I found it captivating in it’s own freaky way, but I understand it won’t float everyone’s boat. People for loads and loads of gore (a ‘la “Dead Alive”) will be sorely disappointed, only the aftermath most of the murders is shown. Just remember the real story was a helluva lot worse (the ‘Becky’ character was Henry’s 12-year-old lover, whereas in this she was a young woman) This is now my 2nd-favorite serial killer movie (yep, “Tony”‘s still the best.) It’s a must-see for horror fans who aren’t afraid of getting their hands a little dirty film-wise. 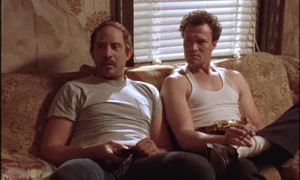