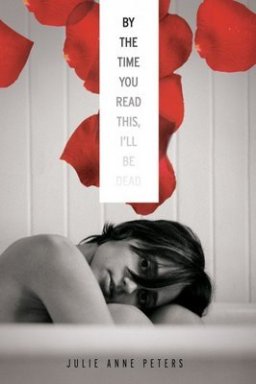 Although it has some examples of grating and cliched prose (all of which is typical for YA lit,) “By the Time You Read This, I’ll Be Dead” provides a fairly accurate look at the confused and self-despising mind of a suicidal teen. Daelyn Rice is at boiling point- after various attempts to take her own life, she has joined a suicide completion web site and is determined to succeed this time. Her parents are amiable but clueless- her classmates, cruel, and her teachers apathetic. Daelyn’s head brims with contradictions, despair, and hopelessness. She both hates the world and hates herself- but will the eccentric Santana draw her out of her suicidal shell?

Daelyn was an simultaneously tragic and profoundly frustrating. She’s a sick little girl, and considering her history of bullying by both the kids and adults in her life, that’s no surprise. I was so mad at Daelyn’s parents, though of course I felt bad that their daughter detested them and wanted to kill herself. I don’t know about you, but if I was locked in the closet for eight hours by some students and pissed my pants, my dad would be tearing the bullies, the teachers, and the administration a new asshole.

And I understand why parents don’t have the time and resources to homeschool their bullied kids. But don’t these people have any protective instinct towards their offspring? At first I thought Chip and Kim Rice were nice. Now I think they’re idiots. Daelyn herself is a somewhat unreliable narrator, especially in the way she portrays suicide. I would suggest that parents look up this book before they let their teens with depressive issues read this. I know you can’t always control what teens read, nor would they want to (adolescence is a time of burgeoning freedom) but the story is not exactly hopeful, and could be triggering to a certain audience.

However, for teens who are not suicidal-slash-are recovering, this is a compelling read. The Santana/Daelyn aspect was a little unbelievable. Trust me, I’ve been there, I’ve been drawn within myself and bitter and hopeless, and nobody pursues you to the point that Santana pursued Daelyn. After a while, they stop trying to open you up. And when they reveal Santana has cancer? Please. Figures that the one boy who follows her to the ends of the earth is extremely ill.
‘By the Time You Read This…’ isn’t for everyone. Depressing for some audiences, annoyingly one note for others, the book is best suited for people who have been lowered into the abyss of depression, either by traumatic life experiences or their own inner demons. You’re more likely to enjoy the book if you can relate to Daelyn to some extent. Which I did. Her downer attitude was exasperating at times, but that’s what bullying does to a person. Please. Bullying is not, and will never be cool. Don’t fuck with people.