“Is that that Seth Rogen guy? What’s he doing?”

“Acting? You mean actually giving a performance without using immature fart or stoner humor as a crutch to compensate for an apparent lack of talent? Well, I’ll be… Do miracles never cease?”

Seth Rogen is, indeed, quite good in this. The scene where he expresses, in various takes, his shock and horror at his wife’s infidelity is revelatory. Overall, though, “Take This Waltz” is so-so, marred by a lack of likable characters and consistent dialogue.

I there’s one thing you can say about this movie, it’s that it doesn’t glorify the act of adultery in any way. Bored housewife Margot (Michelle Williams, who gives a very nice performance here) engages in cutie pie antics and baby talk with her husband, Lou (Seth Rogan,) but longs for passion and intimacy.

When Margot meets Daniel (Luke Kirby,) a handsome artist, sparks fly almost immediately. As it turns out (damn you, fate!,) Daniel lives right next door to Margot and Lou’s place, and temptation for indiscretion may be too much to resist. But what are the consequences for such an act?

The relationship between Lou and Margot was interesting. I could neither fully support it, nor deny it’s moments of comfort and familiarity. I can understand Margot’s need for a more intellectually stimulating relationship (as any reasonably intelligent person would presumably have,) as many of the ‘tender moments’ between them were saccharine or just plain icky.

However, we don’t really see a side of Daniel that allows us to understand Margot’s prompt crisis. In fact, some of the dialogue was just as vomit-inducing, and the scary thing is, I’m not even sure it was meant to be. For the most part, the characters were more exasperating then likable.

This would be a much better movie if not for the dives in quality of dialogue. “Take This Waltz”‘s acting is both fresh and powerful, as is it’s refusal to slap itself with a happy ending. However, I have difficulty recommending it and will, sighing, present my ambivalent review. 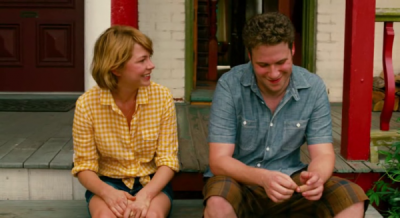 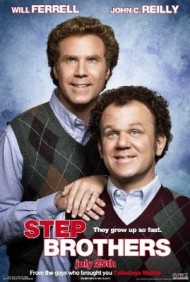 Okay. If you are planning to rent this film because you like Will Ferrell, or because you laughed (as I did) at his intellectual masterpiece Land of the Lost… stop and think for a minute, a practice this film ignored completely. Emotionally underdeveloped males are not funny.

Vindictive man-child squabbling is not funny. Middle aged men too lazy and pathetic to get off of their behinds and get jobs, only feed off of their long-suffering parents with the will and determination of parasites… not funny. Even if one of them is played by Will Ferrell, the humor is still pretty nonexistent.

Step Brothers, an uneasy blend of Paul Blart – Mall Cop and Chuck & Buck, is the kind of throwaway film people might awkwardly refer to as “cute” (as in “was it a good movie? it was… cute.”) The trouble is, it is far too resolute in it’s crudity to pass as such.

It mistakes winces for laughs and hammers its content ferociously into the viewer’s face, hoping that its gall will earn some kind of respect. It’s not even or satirical enough to pass as dark humor. As a feel-good raunchy comedy, it misses its mark completely, despite some ‘ah gee’ moments near the end where relationships are salvaged and the imbeciles are rewarded for their actions.

The premise runs like this – two older people Robert (Richard Jenkins) and Nancy (Mary Steenburgen) meet at a science convention, bond, and are in each other’s pants within the next five minutes. They put their clothes on, straighten up and get married. Nancy and Robert would like nothing more than to take Robert’s boat and embark on an indefinite vacation.

One both rubs his testicles on a drum set and is forced to lick a mound of dog feces, all in the same film. If you are interested in seeing Will Ferrell’s balls, maybe you should rent and enjoy this movie. If not…. maybe not. They should probably be marked as Will Ferrell = Brennan and John C. Reilly = Dale, since there is no personal variation between them. They exist as characters to disgust and half-heartedly amuse.

Although Richard Jenkins, playing in my recent reviewed film Burn After Reading and receiving an Oscar nomination for The Visitor (bought but not seen) has participated in many of the Farrelly’s films, I had no idea he could sink this low. He’s the only character with a working brain in the film (as his wife smiles and says “I think they’re bonding,” he responds, “I don’t like this.”)

However, for this character to work, one would need a director with a apparently functional brain. At an afterwords at the credits, when Brennan and Dale face their grade school-sized bullies, one punches a child repeatedly, his head bobbing back and forth like a rag doll. That’s the whole trouble with Step Brothers – it has no understanding of what’s funny and what isn’t. Equipped with this bumbling ignorance, it shamelessly hits all the wrong notes 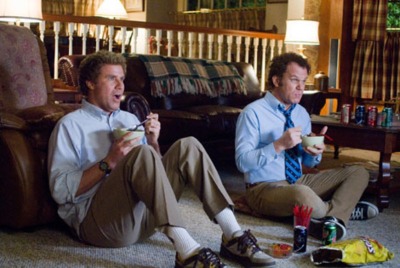