When in doubt, let go of the inhibitions and prejudices holding you back. A high-powered career person’s heart melting after being given custody of an adorable orphan  isn’t the most  original premise, but “Mostly Martha,” with the help of a touching performance by it’s lead, Martina Gedeck, handles the somewhat been-there-done-that story line with surprising finesse.

Martha (Gedeck) is a neurotic, anal-retentive chef who is helpfully informed by her boss Frida (Sibylle Canonica) that the only reason she hasn’t been fired for her temperamental behavior and fiery outbursts is because she is an amazing cook. Frida wants to hire another head cook to help Martha in their posh restaurant, but Martha is quite insistent that she be the only one in the kitchen, as in life, to run the show.

When Martha’s sister Christin abruptly and tragically dies in a car accident, Martha is given  custody of her eight-year-old daughter, Lina (Maxime Foerste.) Martha has no idea to to connect with the depressed and unresponsive girl, especially when grieving herself for the sister she didn’t have the warmest relationship with. However, Mario (Sergio Castellitto), an eccentric new employee at the restaurant and potential love interest for the uptight Martha, may help give her and Lena the new lease on life they need.

“Mostly Martha” has it all- tragedy, love, romance, tension and lots and lots of food porn. It did think it was a little so-so as far as plot (especially with the big turning point where Martha just hands Lina over to a man who’s apparently her biological father (Diego Riban) on the basis of a letter and with no questions asked- never mind that this guy could be a sex offender, an addict, or just an all-around horrible dad… paternity isn’t everything folks!) Also, the ending seemed a bit easy, but it’s intention is clearly to be a romantic heart warmer, not a cut-and-dry realistic piece.

However, where the plot may falter, Martina Gedeck is completely convincing as Martha, the kind of woman who goes to a psychologist (August Zirner) and takes up their time together with talking and making metaphors about food. Martha loves food as much as a Trekkie love their Spock and Picard- it’s not as much a mere interest as an all-consuming obsession.

Gedeck makes us sympathize with a chilly, emotionally damaged woman that would probably be hell to be around in real life, and she never overplays her character or makes her a cartoon of compulsive behavior. We root for her to end up with Mario and maintain custody of Lina not because these things cure her of her frustrating tendencies but because they make her a happier person- and happiness seems to be a step in the right direction.

So, even though “Mostly Martha” is a mostly formulaic movie (see how I did that there?) , the acting and the undeniable chemistry between Castellitto and Gedeck make it a savory romantic comedy, if not a mind-blowing one. There’s no doubt in our minds what’s going to happen by the film’s end, but there’s no reason why you shouldn’t partake, unless of course your an incorrigible sourpuss. Plus, food porn! If you like foodie movies so you can sit back and undress the food with your eyes, this is the movie for you. “Mostly Martha” is ultimately more an appetizer than a banquet, but it’s a pleasant and charming diversion and by all means worth checking out. 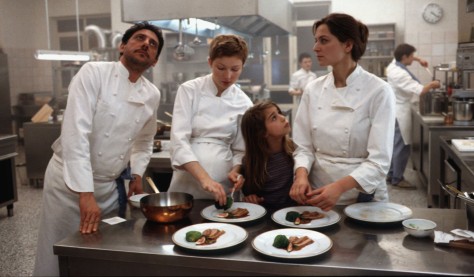