Rating: C-/ Loud, crass, self-indulgent, and with more dick and blow job jokes than a stand-up comedy hour commandeered entirely by drunken frat boys, Deadpool is an over-rated, interminable mess. You can practically hear the jokes fall flat at delivery, which is kind of sad, because you can tell it really really wants to be funny, but somehow it just keeps coming up short of charm and laughs. END_OF_DOCUMENT_TOKEN_TO_BE_REPLACED

All in all, “The Captive” is a pretty lame movie. It incorporates a ‘ripped from the headlines’ story with an admittedly good performance from Ryan Reynolds (who’s obviously trying to shed his ‘pretty boy’ image, with some success, but that doesn’t make this movie good,) but ultimately proves to be an unthrilling film that fails to be realistic or compelling.

Most of the fault seems to be with Kevin Durand, who plays a mustachioed pedo freak which such cartoonish abandon that one can only sigh and weep for the direction this movie takes. Durand’s Mika (but I’ll call him pedostache, mm-kay?) kidnaps young Cass (played by Peyton Kennedy as a child and Alexia Fast as a teen) from under poor Reynolds’ nose and does unspeakable things to her.

Reynolds, her dad, is blamed by his grieving wife (Mirielle Enos) for leaving Cass in the car for just a minute as he went into the pie shop to get dessert for his the three of them. Luckily, police officers specializing in child abduction and sexual abuse Nicole  (Rosario Dawson) and Jeffrey (Scott Speedman) are on the case.

It’s every parents worst nightmare, and great fodder for a thrilling, terrifying crime story, but something is missing. And it’s a shame that, with Reynolds performing so admirably, the central villains performance often lowers the film to ridiculousness.

Mika is an ever-so-slightly effeminate deviant with a pencil-thin pedostache, bleached buck teeth, a habit of crossing and uncrossing his legs constantly, and a penchant for opera, in other words, a live-action cartoon character who is impossible to take seriously in a film that is otherwise for all intents and purposes, earnest.

What the film doesn’t realize is that pedophiles look like regular people. They look like the kindly old man halfway down the block, the big bearish uncle who used to placate you with sweets and hug you a little too tightly. To portray an offender as a John Waters-esque creep is to do a disservice to reality. And Durand’s overly zesty performance doesn’t help.

Let me tell you about the ending. Obviously, **spoilers. Read at your own risk. Cass, who looks thirteen like Dame Maggie Smith looks twenty-five, is freed, and the baddie is smote. She returns to her regular life almost immediately, and the film closes on her ice-skating with a happy grin on her face. After years of Tina (Enos) psychologically abusing Matthew (Reynolds) and blaming him for their daughter’s’ disappearance, it seems like the duo will automatically get back together.

Aw, how Kodak. Bring out the camera, folks! Smile! Except all I can say is, really?!! Not only does the film completely fail to mention that Cass will be scarred for life and saying she will have trouble adjusting is a massive understatement, the revelation of Matthew and Tina hooking up at the end seems completely false. Their daughter is back, suddenly everything is swell! Never mind that the whole family has been completely through the ringer and will probably be deeply damaged for the rest of their lives. **end of spoilers

It would have been interesting to see Reynolds play the bad guy like he (sorta) did in “The Voices” (the “Voices” anti-hero wasn’t a pedo though, just a nice old fashioned serial killer.) To see Ryan Reynolds play a perv would be so totally different that I would kind of have to applaud it. As least “The Voices” felt like a unique experience. “The Captive” feels like a nighttime crime show that you half-watch while occupying yourself elsewhere. A really bad crime show. Ryan Reynolds, I don’t think this movie is the best way to further your career.  Although, I must admit, playing alongside Durand did make you look damn good. 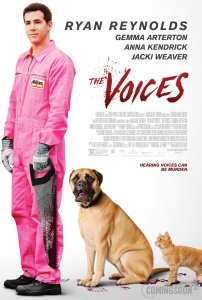 Jerry Hickfang (Ryan Reynolds) is the kind of man no one would suspect of any wrong doing- well-groomed, mild-mannered, and charmingly naïve and uncomplicated, he gets along with all his co-workers at the bathtub factory at which he works, and lives a comfortable life with his cat and dog in the podunk town of Milton.

But Jerry has deep-seated problems- problems that stem from his Schizophrenic mother, his abusive stepfather, and his own out-of-control fantasies and delusions that manifest themselves in voices and often comforting, if woefully misleading, visions. Like many mentally ill people, Jerry finds that all the color is drained from his life when he takes the zombifying pills his psychiatrist (Jacki Weaver) prescribes.

But Jerry has a secret. It’s not that shocking that Jerry talks to his pets (Hell, doesn’t everybody?) But his animals have been particularly vocal lately. His cat, especially, has been known to push him to the edge. And Mr. Whiskers has an agenda- an agenda that turns downright murderous after Jerry accidently kills his indifferent love interest Fiona (Gemma Arterton) in a fit of panic.

Mr. Whiskers is insistent that Jerry kill again, but Jerry’s lovable mastiff, Bosco, tries to convince Jerry to live a morally righteous life. Jerry’s descent into madness is both wickedly funny, fairly disturbing, and oddly touching. “The Voices,” helmed by the graphic novelist Marjane Satrapi (‘Persopolis,”) is an offbeat morality tale about the pressures of being a ‘good boy’ Vs. giving in to your inner sociopath.

The script is convoluted, and downright ridiculous at times- the deer scene will make you laugh if you aren’t too busy cringing at the copious gore. But it’s all part of the blackly comic vision screenwriter Michael R. Perry has offered up on screen for us. “The Voices” is also visually striking; there’s a distinct contrast between the beauty, presented up in rich hues that makes up how Jerry sees the world and the dank, dark reality of Jerry’s bloodstained apartment.

Ryan Reynolds gives a commendable performance as Jerry, an upbeat man-child with a homicidal streak, and disturbingly, you’re forced to sympathize with his earnest if deranged worldview, and thus, to some extent, his crimes. Bosco and Mr. Whiskers are also voiced by Reynolds, which makes perfect sense, being that they are quite literally extensions of Jerry himself.

Considering the talent that is on display here, the totally WTF ending is regrettable to say the least. It’s like the writer went ‘what the hell’ after days of writer’s block, got high, and quickly scrawled down an ending with no real cohesion or connection to the rest of the story. Why not have a big song and dance sequence at the end of your horror film? Add Jesus? What the hell! We don’t see enough of that guy these days anyway.

For people who wanted an actual conclusion to Jerry’s story, that you know, made any kind of sense whatsoever, the ending will be a huge disappointment. Simply put- this is not a great movie. But it is the kind of movie I like to watch, off-the-chain and quirkily, even shallowly psychological, so I’m bound to cut it more slack than some people might.

For those viewers who set their expectations (reasonably) low and prepare for a stinker of an ending, for those movie lovers who like their comedies pitch-black and all kinds of twisted, The Voices” might turn out to be a strangely gratifying experience. Because like poor Jerry Hickfang, we all see the world the way we want to see it. But unlike Jerry, most of us are unwilling to kill for that vision.