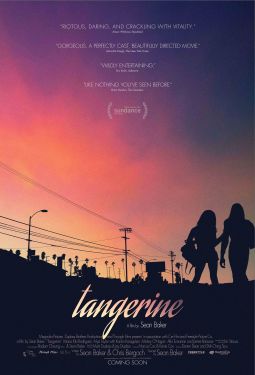 Trashy people doing trashy things, set to the score of an interminable Dubstep soundtrack. The most interesting thing about this movie (shot on a cheap cell phone camera) is how it got the critics jizzing their pants over it.

I won’t deny that Tangerine is probably a pretty accurate reflection of a certain way of life, but in the process of portraying a transgendered working girl’s gritty urban existence, the film makes commits two unpardonable filmmaking sins- it completely lacks a interesting narrative or characters worth investing your sympathy in. The actors possess a certain naturalism and finesse for a movie with a budget this low, but who gives a shit about this story? The non plot combined with an instantly unlikable protagonist make Tangerine tedious as just over eighty minutes long.

Sin-Dee Rella (Kitana Kiki Rodriguez)- seriously, that name- is a transsexual prostitute (and still the possessor of male sexual organs) who get out after a short stint of jail to find out from her bestie (Mya Taylor) that her man and pimp has been screwing around on her. The entire movie concerns Sin Dee traipsing around L.A. trying to find her guy (James Ransone) so she can raise some hell. An admittedly much more interesting subplot concerns an unhappily married Armenian cab driver (Karren Karagulian) with a preference for trans hookers that still have their cocks intact. Unsurprisingly, this causes some tension with his wife and mother-in-law.

However, this plotline is never resolved as the narrative focuses on the unbearably catty and self-absorbed Sin-Dee as she spends Christmas Eve in Los Angeles seeing her quest through. Sin-Dee talks, looks, and acts like a character in a reality television program and I can imagine most people would only play along with her bullshit for so long. You keep your hands off her man, you hear, or otherwise she might just have to bust you up! Some viewers might find her sympathetic, I didn’t. It’s not that people like her don’t exist, they emphatically do, but I was utterly disinclined to watch her throw a hissy fit for eighty minutes.

If there’s a discernible plot to this movie, I’d be enthralled to know what it is. There’s some sex, some drug abuse, a catfight between Sin-Dee and her boyfriend’s new lay (Mickey O’Hagen.) There’s a lot of Sin-Dee wandering around the ghetto spewing profanities and man-handling various people. It’s hard to care about a story that goes absolutely nowhere and harder still to care about a trashy queen with a flair for drama and seeing others anxious or upset. If you want to see a trans woman struggling with her gender identity in an inner city environment, watch Gun Hill Road. That was an amazing film that grabbed your heart and didn’t let go.

I’ll admit, Tangerine looks passable compared to other independent films shot on cell phones. it even has an element of realism, and I don’t fault the actors one bit for my utter disinterest in the film as a whole. They took what they had to work with and they ran with it. But Tangerine  is not funny and it is not dramatically satisfying. Being that Sin-Dee scarcely shows a sympathetic human side, instead choosing to bask in drama and the heartache of her friends and neighbors, it’s really hard to like or empathize with her. I admire the good ideas this film incorporates into it’s script, but it’s so hard to sit through as a whole. A film needs a plot to carry its characters to a chosen destination, and it is in that area that Tangerine seriously lacks.