In these visions of the future, do things ever go even slightly well? Okay, okay, I’ll grant you “Star Trek,” with it’s intergalactic exploits and shows of compassion and friendship between James T. Kirk and the impeccably logical Vulcan Spock. “Star Wars” maybe, But for the most part, for every good thing that happens in a science fiction film, a hundred shitty things happen almost simultaneously.

Take the government for example. The government in Alfonso Cuarón’s “Children of Men” is shady at best, completely, reprehensibly corrupt at worst. They even offer suicide kits for disillusioned citizens with which to off themselves in a pinch. “Ah, but at least there IS a government,” you say? Well in this society, even total anarchy seems preferable to this Hell on earth. Never has a post-apocalyptic future looked so bleak.

In “Children of Men”‘s world, women have become infertile, causing mankind to lose faith in our survival. Politically apathetic citizen Theo (Clive Owen) is begrudgingly hired by his ex-girlfriend Julian (Julianne Moore) to smuggle the teenaged Kee (Clare-Hope Ashitey,) the first pregnant woman in eighteen years, out of the ransacked Britain to a program that supposedly can help her.

Julian is a member of an underground group known as the Fish, which rebels against the government, often through acts of urban terrorism. She and Theo have a big-time history, having had and lost a child together. As Theo and Kee make a desperate bid for survival, everyone wants what Kee’s got for their own twisted agenda- including some of the Fish, who think ownership of the child will help their political cause.

“Children of Men” seems hyper realistic despite it’s mostly unreal premise, which nonetheless bears resemblance to many aspects of societal discord, including the Fish as kind of a post-apocalyptic IRA. The actors give excellent performances, including virtual unknown Ashity as Kee and Michael Caine as an amiable pothead who’s long since retreated to live apart from society’s electric eye.

I like the fact that Kee is promiscuous and not at all attempt to capture the sanctity of a Virgin Mary-type character. The girl’s got a mouth on her, and, you know, I kind of like that. However, she and Theo form a (strictly platonic) bond as they evade the corruption of futuristic Britain. There’s also a Holocaust-type vibe to the story as Illegal immigrants are caged and brutalized for the sake of the country’s ‘purity.’

I was initially not sure if I would like this movie, since it was not on my immediate radar, but “Children of Men” proved to be timeless science fiction, up to par with “Blade Runner” (I personally think “2001” is about as riveting as watching paint dry, to use a film-critique stereotype, so you won’t get my support on exulting that one.) I actually found myself tearing up at one point, which I only do occasionally, because “Children of Men” has what many apocalyptic fests lack- a heart. This is one of the few science fiction movies I would even readily describe as ‘beautiful.’

Violent but strangely sad and tender, “Children of Men”knocks it out of the ballpark and is most not just another stuff-goes-wrong-in-the-future motion picture. People with short attention spans might be disappointed, but those who approach the experience of watching a movie as akin to reading a book will instinctively know what I know- that patience, and thoughtfulness, holds its own rewards. 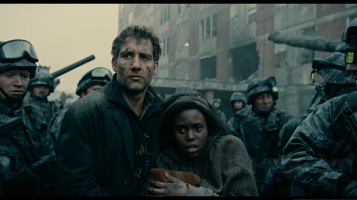