Rating: D-/ Flowers is a very strange film, and not in a good, Eraserhead way as much as a ‘why-the-fuck-am-I-watching-this’ way. Although it is almost entirely devoid of redeeming qualities, I enjoyed watching it, the reason being that I got three of my best friends over to watch it and we kept up a running commentary of it’s pointlessly self-indulgent ridiculousness. I’m thankful for my friends and their crazy senses of humor for making this even watchable. END_OF_DOCUMENT_TOKEN_TO_BE_REPLACED

So, apparently this movie is super rare and eventually I got my hands on a bootlegged copy (don’t judge me, I’m not proud of it!) The DVD I now own is the short version (at 75 minutes) and has somewhat grainy picture quality. The plot follows the homicidal maniac credited simply as ‘the psychopath’ (eerily played by Erwin Leder,) who is released from prison where he served time for the murder of an elderly lady only to set his sights on a family living in an isolated house.

The main character never kills to steal or pillage. He has no use for cash or fineries, and never knew his victims prior to the homicides. He kills simply because he gets off on it. He has never known a life without cruelty or abuse, and this is neither a rationalization or an excuse. Now I’m going to format this review a little differently than the others. Here are some thoughts:

. “Angst” approaches the serial killer genre a little differently than other films of it’s kind. First of all, the movie makes no effort to sympathize or rationalize the killer’s actions. Unlike, for instance, Gerard Johnson’s “Tony” (a very good movie in it’s own right) where you grow to feel for the psychopath, Leder’s killer is unrelentingly (and perhaps appropriately) loathsome.

. I may be mistaken, but I believe the killer never speaks to any of his victims. We hear his voice through a voice-over narration. This is an interesting filmmaking method, as is the bizarre and jarring cinematography and soundtrack.

. I hate the fact that this guy even got out of prison because he made up some bullshit story about being well. Twice! (the first was for the murder of his mother.) People like this should be kept behind bars for as long as humanly possible, as with all mass murderers and sexual deviants. It’s not worth it, people! (Okay, that’s my inner Conservative talking, but it’s a pretty f’ing valid point.)

. It made me mad when I saw that the wheelchair-bound man-boy (Rudolf Götz) at the home the killer broke into was left alone in the house. I’m sorry, but a man with the IQ of an infant shouldn’t be left to fend for himself while his mom and sister are out shopping! He could fall out of his wheelchair… or, shit his pants… or have his home broken into by a necrophiliac serial killer! See, the unthinkable does happen!

. The stand-out actor was definitely Erwin Leder. Rudolf Götz was good too as the mentally challenged man. Silvia Rabenreither and Edith Rosset were a little weak as the daughter and the mother, respectively.

. I was puzzled and relieved that he *MILD SPOILER* let the dog live. My only guess (besides that he was just such a nice guy, har-har) is that he wanted a relic from the killings. Whatever the reason, I was happy that the cute little daschund did not meet a gruesome (and untimely) end. *END OF SPOILER*

Overall I found this movie interesting because it offers a glimpse into a serial killer’s mind. I didn’t really find it all that disturbing, but others might be horrified by the violence displayed here, so for that reason I would not recommend it to sensitive viewers. The camerawork and soundtrack are another asset- haunting and strange, it adds to the sense of disorientation and horror the movie is trying to achieve. Watch it, if you can find it. 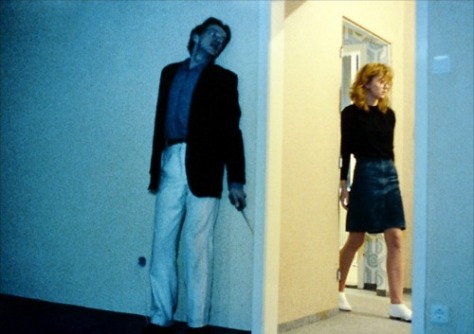