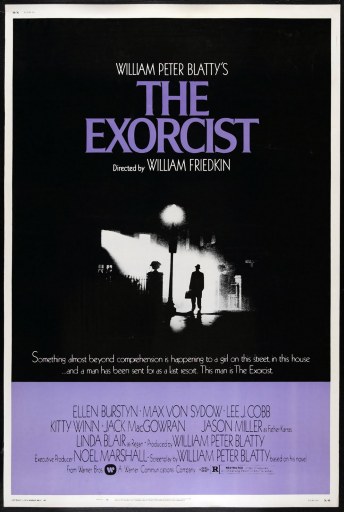 Rating: B/ So, I finally watched The Exorcist; which makes me kind of late to the party, doesn’t it? My dad, who is a Catholic (or used to be at one time) assured me it was one of the scariest, if not the scariest, movies ever, and he has been talking up just how scary it is for years. Well, as usual, the experience falls short of the hype. Which is not to say The Exorcist is a bad movie; it is definitely an unnerving film with some undeniably creepy moments, and taut editing that makes your hair stand up on end. But I didn’t find myself becoming terrified by it, and there’s definitely something darkly humorous about a possessed twelve-year-old spitting up green goo on a priest’s glasses, and wildly stringing together obscenities like a pro. END_OF_DOCUMENT_TOKEN_TO_BE_REPLACED

Gentle and bittersweet, “Extremely Loud & Incredibly Close” is the second movie adaptation of “Everything is Illuminated” author Jonathan Safron Foer’s novel. Although the movie is littered with stars such as Viola Davis, Tom Hanks, and Sandra Bullock, newcomer Thomas Horn steals the show in a flawless performance as Oskar Schell, a troubled eleven-year-old prodigy struggling with his dad (Hanks’) death in the 9/11 terrorist attacks.

Oskar could be rude, he could treat people sh**ty, but I immediately rooted for him. It helps that he reminded me of a friend of my brother’s I’m fond of. While Oskar’s dad was alive, he would send him on scavenger hunts. When Oskar rummages through his dad’s closet and finds a key with a word on it, Oskar believes his father wants him to find the lock the key belongs to.

Oskar probably has Asperger’s, and that becomes a factor as he travels through New York City battling anxiety, loud noises, and his own worst fears about Urban terrorism. Meanwhile, his well-meaning mother (Sandra Bullock) tries to get through to her angry loner son. I wasn’t sure about Sandra Bullock prior to this movie because I thought she was undeserving of the Oscar for “The Blind Side” but she was good here. You can’t help but feel for her when her son throws angry words in her direction.

Linda (the mom)’s unconditional love for her son touched me, as did her quiet grief, but Oskar and the otherwise unnamed ‘The Renter’ played by Max Von Sydow were my favorite characters. ‘The Renter,’ true to his title, rents a room from Oskar’s grandmother and accompanies Oskar on his perilous quest.

The only complaint I have with this movie is that the premise was very unrealistic. I mean, the word ‘Black’ that comes with the key could meet anything and Oskar is immediately on the right track. Not only that, but as Oskar looks for people with the last name ‘Black,’ he doesn’t even think that not only is ‘Black’ a ridiculously common name, but there’s no guarantee that if this ‘Black’ is a person, that they live in New York city!

I liked Oskar a lot. I liked his way of looking at things. Thomas Horn interpreted Oskar honestly and touchingly. This is one of the most underrated child performances of all time (probably because the movie wasn’t received well, for what reasons are mysterious to me.) I wanted him to be happy, and move beyond the tragedy of his dad’s death and the tragedy of 9/11 in general. Many lives were affected that day, and this movie offers sympathy to both the lives lost and those left behind.

To breach another subject, I thought the depiction of Asperger’s  was very good as someone diagnosed with the condition. The funny, idiosyncratic things Oskar said seemed very typical for someone with AS, while his social anxiety was easy to relate to. A lot of movies exaggerate AS symptoms for ‘Hollywood’ effect, making the hero some kind of head-banging, socially defective prodigy. I mean “Rain Man,” that was put out near the beginning of Autism research. But “Mozart and the Whale?” Seriously?

And let’s not forget how good the entire cast was throughout this movie. Tom Hanks, Sandra Bullock, Viola Davis, Max Von Sydow, Thomas Horn of course… they all played their roles wonderfully and were touching and likable. I’d say Von Sydow and Horn were the standouts among this amazing cast. Von Sydow as the silent renter had no spoken lines, but managed to convey emotion like a pro. I’m going to have to diverge from the critics and say this movie is absolutely worth seeing. It’s worth it.