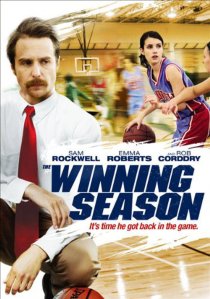 But for many a Sam Rockwell, there’s a Emma Roberts waiting to bungle up the movie. I just don’t like her in anything. To be fair, though, this time the fault isn’t Emma’s. It’s the script, which plays on every ‘inspirational sports movie’ trope known to man, and does it with the shameless belief that it will move you to tears, endear itself to you, and make you write a glowing review totally different from the one I’m writing now.

The plot is utterly familiar even if you know nothing going in– underachieving alcoholic loser and basketball-playing has-been Bill (Sam Rockwell) is working as a dishwasher when his old friend Terry urges him to coach Girls’ Basketball. The foul-mouthed, half-heartedly sexist Bill is convinced that girls playing basketball is a superfluous pastime, but he reluctantly agrees so he can quit his dishwashing job.

Right off the bat you wonder– what makes Terry think that Bill is up for coaching a bunch of high school girls? Why because he couldn’t find anyone else, of course. No one else? But I digress. Bill is a slovenly pig, a miserable knob who eats chicken fingers off of his customer’s plates and, initially at least, fails to show the girls one ounce of respect while coaching.

But you know off the bat (because this is this type of movie) that Bill will tag his ragtag team of losers and make them winners, inspiring the girls, and maybe, learning to face up to his inadequacies in the process. And of course Bill is the deadbeat father of a neglected teenage daughter (Shana Dowdeswell) and a disapproving ex-wife (Jessica Hecht) who has found Mr. Perfect and now takes every opportunity to passive-aggressively make Bill feel like shit.

As Bill gets embroiled in the girls’ individual dramas, he comes to the well-worn revelation that no, these girls don’t have game, but they have heart, and he can really make something out of their team. Even as Bill mans up and becomes a supportive coach, he isn’t really a very likable protagonist. I think it’s because he lacks any kind of substantial depth. Even his character is nothing more than a tired trope.

And does the director of this film think it’s dramatically satisfying to watch the entire basketball team haul the inebriated Bill into his apartment? It’s a fucking disgrace. If you get so drunk while coaching that you have to be carried like a baby by a bunch of 17-year-old girls, well, maybe you shouldn’t be a coach. It was shameful to watch, frankly.

Then we have the ‘big finale’ where Bill breaks into the  stadium where the climactic game is being held in full costume after being laid off and told to stay away from the team. I wonder if it was really worth it to run away from the police in a cape,  a wig, and full body paint as opposed to, y’know, waiting it out and taking the girls out for Shoney’s afterward.

Despite the film’s flaws (and boy, are they many,) most of the girls give charming performances (including Rooney Mara in a pre- Dragon Tattoo role) and Emma Roberts (as the pragmatic Abbie) isn’t as insufferable as usual. Let me put it this way- if you like basketball and cheesy, feel-good movies, you might like this, so don’t cross it off your to-see list yet.  I guess I’m the wrong audience for this movie. All I know is that Sam Rockwell can do better, and has.