Rating: B-/ I’ll begin my review by saying this; people who rent this movie probably know what they’re getting. The acting is terrific all around, but the movie itself is overwrought, filled with shrieking and heated accusations. It gained my sympathies and tugged on my heartstrings, but I feel like it did it kind of dishonestly, if that makes sense; instead of being extraordinarily well-written or featuring interesting characters it jack-hammered it’s way into my heart by presenting me with lots and lots of showy displays of grief. The excellent actors are compensating for the fact that there isn’t much below the surface here. END_OF_DOCUMENT_TOKEN_TO_BE_REPLACED

Rating: B+/ So, is the movie called Little Children because the sex offender played by Jackie Earle Haley has a thing for little children or because all the adult characters in the movie act like little children, self-obsessed and bickering? The jury’s still out on that. While the main plotline concerning extramarital affairs and upper-class ennui in an affluent suburban neighborhood is dark and distressing enough, I found the subplot following a child abuser and exhibitionist moving into his mothers’ house after being released from prison (the superior thread by far) absolutely harrowing. Did this movie really make me feel compassion for a guy who gets his kicks flashing his weenie at little kids? What does that say about the film’s aptitude for puzzling moral ambiguity? Moreover, what does it say about me? END_OF_DOCUMENT_TOKEN_TO_BE_REPLACED

There is one great moment in Phenomena, Dario Argento’s frustratingly Schizophrenic fright flick. In this sequence, which stands head and shoulders above the rest in an otherwise incomprehensible movie, a pet chimpanzee named Inga rushes to warn her human daddy John (Donald Pleasence) that a killer has broke into his house. Alas, John is paraplegic, and as he slides down the stairs on his device built for wheelchairs to let the poor simian in, the killer, cloaked in shadow, pushes the button on the control panel to trap  him on the staircase.

It’s a tense moment, punctuated by the screams of the frightened ape. But the rest of the movie is a shoddy mess, with jarring metal music and terrible acting. This is my first Dario Argento horror film. Maybe I should have started with something else? There are times that Phenomena is so bizarrely put together, like a pastiche of hellish themes and images, that is almost becomes so bad it’s good. Almost. Argento had an amazing idea, but it’s ultimately all for naught. Could this be a classic horror movie actually in need for a remake? Purists would shudder to think of this film being refurbished, but I think it is actually a distinct possibility.

Jennifer (Jennifer Connelly, in a very poor performance) is a teenaged schoolgirl neglected by her wealthy actor father. She is sent to boarding school at the beginning, and while she might seem like your everyday debutante with too much money on her hands and not enough to do with it, she is anything but ordinary. Firstly, she is much more down-to-earth than the other girls in the academy, but that is not what sets her apart. Jennifer can communicate telepathically with insects, and this might come in handy with a serial killer on the loose. With girls dropping like flies (no pun intended), Jennifer befriends John (Pleasence,) an entomologist studying the part bugs play in the decomposition of corpses. Not creepy at all, right? He also has a pet monkey, who’s kind of important, as she turns out to be much more deserving of the title ‘hero’ than Connelly is.

Phenomena has an abundance of imaginative images and ideas, but ultimately it comes off as an unintentional comedy. Part of this is the acting; while Pleasence is competent at his craft as always Connelly can barely deliver her lines in a convincing manner and the rest of the cast is  just terrible. Heavy metal songs by artists such as Iron Maiden and Motorhead cut into the action at the most unsuitable times, and the film has a definite MTV vibe to it. You practically expect Beavis and Butthead to be commentating in the background. Yeah, Jennifer Connelly is… hot. Motorhead is… cool. Uh-huh-huh. In fact, America’s two favorite idiots would be easier to take seriously than this movie. Forget how powerful Connelly was in Requiem for a Dream. Watching her here is positively painful. It’s like seeing the ass-to-ass scene from Requiem a billion times back-to back. You just want to cry for her. And not because of her aptitude for the craft, either.

The last twenty minutes are almost worth watching just for the crazy turns the plot takes, but they’re not enough to sit through a hole-filled, badly acted, and yes, boring story. Why is this school open when girls are constantly dropping dead? Why does John send Jennifer to find the killer all by herself? Why does the killer kill? No seriously, did someone just happen to overlook the villain’s motivation? Why can Jennifer talk to insects but not larvae? Why does the little boy look like that? The reason for all of these, of course, is because. Because that’s the loony-ass direction the plot takes. Terrible actors, dated music video-style sequences, characters we don’t give a damn about; Phenomena is a muddled mess. It’s high point is that it should provide some unintentional comedy for undiscerning viewers. No wonder the ape was the only one I liked. 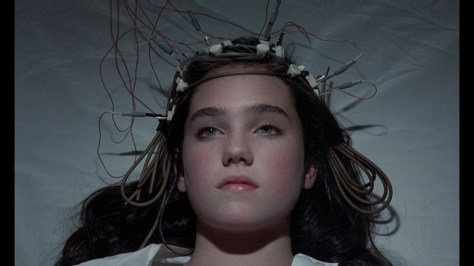 Beware, 80’s kids- I am here to pick apart your childhood classic. There is so much wrong with this movie, I don’t even know where to begin. Mind, there are moments of creative genius at play too, and the puppetry aspect of the film is, well… quite cool, even for a cynic like me. But it’s pretty sad when puppets outshine Jennifer Connelly’s Godawful acting and David Bowie’s mannered affectations as Jareth, the codpiece-donning goblin king (what the Hell people? This is a kid’s movie, is there really room for a villain with his pants stuffed so as to  make his dick look big?)

Sarah (Connelly,) a bratty adolescent deep in the throes of puberty-induced teen angst, calls on the goblin horde from her favorite book to take her perpetually crying baby brother Toby (Toby Froud) away when she is forced to babysit him one stormy night. Much to her chagrin, the goblins, who are- unbeknownst to her- very real- take Toby away to the Goblin King (David Bowie)’s castle. Spurred on by regret and concern for her brother’s well-being (and for the allowance cut she will most certainly receive if her father (Christopher Malcolm) and step-mother (Shelley Thompson,) like, totally come home to find their son gone,) Sarah is taken to a magical land where she much brave the labyrinth- and Jareth’s cunning charms- in order to save her brother.

This seems like mostly a vehicle for musician David Bowie (Bowie sports lip gloss and awful hair, and, for no particular reason at all, bursts into song in several instances,) and I’ve heard rumors that Bowie regrets the project to some extent. I can see why. Allegedly the movie is a fantastical portrayal of the labyrinthine trials of puberty, and the connections are all too obvious. Connelly (who was better off going ass to ass in “Requiem for a Dream,”) can’t act to save her life poor dear.

She hems, haws, and blinks vacuously, but to be fair, the damage isn’t entirely her fault- the scriptwriter gives ‘Sarah’ the most inane lines imaginable. Moreover, unlike fantasy stories like “Harry Potter,” the ‘great evil’ (I.e. Jareth) that Sarah fights doesn’t seem that sinister at all. Weird and gay, yes. Sinister, no. Sure, Jareth wants to turn Sarah’s baby brother into a goblin and the sexual tension between him and Sarah seems Borderline pedo, but he fails as a truly malevolent or interesting presence. When Sarah meets up with him for the big confrontation, he spends half of the time singing (!) and the other half being humbled in the presence of her womanly power.

It’s bad when the most threatening presence in a film that strives to be epic fantasy is a stench-emitting, farting bog. That said, the puppets are wonderful. My personal favorite, Didymous the mace-wielding Chihuahua, was a steady mix of cute and cool. It was just so easy. Pit Sarah against any legit fantasy villain- Voldemort, Sauron, the baddies from Gaiman’s “Neverwhere”- and she would crumble like the inconsequential schoolgirl she is. Jareth’s main powers consist of looking fabulous and talking you to death, with an extra helping of ‘blah.’

“Labyrinth” leaves me conflicted in that I want the movie studios to bring puppetry back and use it on a better movie, My review is unfair in that the film didn’t have a part in my childhood, and fair for the exact same reason. Sentimentality can muddle your perception of the way things are. And “Labyrinth,” my friends, is no classic. You are free to leave comments championing your nondescript piece of whimsy. if you wish. It’s all the same to me. The puppets, the sets, some of the creative elements were awesome, sod all the rest.