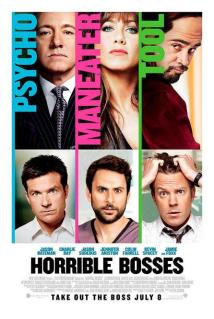 “Horrible Bosses” has a premise somewhere along the lines of the 1999 Mike Judge comedy “Office Space” but “Horrible Bosses” is more brazen, more over-the-top, and in my opinion, funnier. Although “Office Space” had some valid things to say about the ennui of working in a corporate firm, “Horrible Bosses” throws reason to the wind to deliver a hilarious but completely unrealistic story of a couple of immature guys who want to kill their heinous bosses.

Nick (Jason Bateman,) Dale (Charlie Day,) and Kurt (Jason Sudeikis) are a none-too-bright trio of friends who have one thing in common- their rude, crude, and downright evil bosses. Nick’s boss Dave Harkin (Academy Award Winner Kevin Spacey) is a manipulative, outrageously jealous psychopath, while Dale, a faithful partner to his fiance (Lindsay Sloane,) is sexually harassed by his whore boss Julia (Jennifer Aniston, playing against type, with side-splitting results.)

I really think Horrible Bosses’ script is extraordinary, I was laughing throughout. I think “Tropic Thunder,” “Pineapple Express,” “Knocked Up” etc. are really overrated, and it’s nice to see an American comedy movie that’s the real deal, i.e. a really funny mainstream comedy. I also think that Jennifer Aniston and Colin Farrell are better than people give them credit for, and they were hysterical here as two of the three horrible bosses.

“Horrible Bosses” is consistently funny and I recommend it to anyone who likes a good, slightly dark comedy. The cast is great and the dialogue is very quotable. Overall, it is a wildly entertaining diversion and should be watched by comedy lovers everywhere.

Though hardly a consistently funny film, “Movie 43” is, astonishingly, not a complete and utter miss. It is a hit-and-miss spectacle around the lines of 2013’s “The ABCs of Death,” with a comedy rather than horror theme. At it’s worst, it’s still a lot better than the worst “ABCs of Death” had to offer.

The plot is loosely and crudely constructed, with an emphasis on ‘crude.’ The jokes consistently base themselves on shock value and poor taste, with sometimes funny results. This is an anthology film, and the segments all base themselves around this premise- wimpy schmuck Griffin (Greg Kinnear) listens as obsessed screenwriter Charlie (Dennis Quaid) pitches a script to him- a tasteless opus that Griffin quickly dismisses. Undeterred, Charlie holds Griffin at gunpoint and tries to force him to sell the script. The following shenanigans are the contents of this screenplay.

The first segment, “The Catch,” is actually pretty funny as Kate Winslet tries to figure out why no one seems to notice the giant ballsack hanging from her date Hugh Jackman’s neck. Don’t judge me, I laughed. The second one was pretty funny in an ‘ashamed of yourself but laughing’ way, it actually plays on the stereotypes about homeschoolers, as a homeschooled young person I appreciated that.

The only other really funny short in this collection is the grossly inappropriate iBabe. The others range from pretty mediocre to pretty bad. The one with Chloe Grace Moretz, a talented young actress, is just embarrassing and awkward as a teenage girl is humiliated by her inopportunely timed first period and the incompetence of her male audience. The one with Anna Faris was gross and pointless, and is only funny if you like poop jokes and third rate sitcom humor. 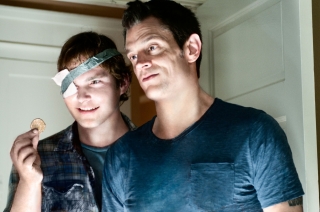 Some of the shorts were mesmerizing in their strange tastelessness, “Beezel,” with it’s homosexual cat jacking off to pictures of his owner in swimtrunks, is a startling example. I didn’t find the short about the black basketball players particularly racist, but I didn’t find it funny either.

“Movie 43” doesn’t really utilize it’s all-star cast, but you could do worse for a late-rainy-day distraction. If you get to watch it free, and want to laugh a few times and think ‘hmm, that’s strange,’ then go for it. It’s not the abomination people have made it out to be, but it’s no classic comedy. Just remember to think for yourself!