Ron Woodroof (Matthew McConaughey, who seems to being turning up a number of good movies and performances lately) is a hard-living, white-trash, uber-masculine cowboy type- who has just been told he suffers from AIDS and has only a short time to live. Ron is initially indignant and waist-deep in denial- the year is 1985 and AIDS is still widely considered a primarily ‘gay’ disease. Woodroof is not gay, He is, however promiscuous and an intravenous drug user, and his hard partying proves to be fateful and eventually, deadly.

Okay, so Ron Woodroof dies. But this isn’t the story of his death. It is about his remaining time, and how he spends it. The only drug the FDA permits for treating AIDS, AZT, is pure poison to whoever consumes it. So Ron starts trafficking non-approved drugs to treat AIDS patients. He is aided by HIV-positive Trans woman Rayon (Jared Leto,) which he is initially not pleased at all about.

Meanwhile, Ron romances doctor Eve (Jennifer Garner) (though nothing can happen because of his disease) and predictably begins to grow as a human being. Eve questions her boss Doctor Sevard’s decision to approve AZT, which leads to her getting fired from her job. Rayon continues to abuse drugs and alcohol even though she’s sick, and soon falls apart.

I understand that the real Ron Woodroof was bi and not even close to the mean sonofabitch he was portrayed as in the movie. The director obviously wanted to push the ‘homophobic-cowboy-finds-his humanity’ redemption story. And it IS a good film. A little obvious in that Hollywood way, but it works, led by two great performances by Jared Leto and Matthew McConaughey (I found Garner and Eve a little dry, though.)

Both lost a ton of weight and were clearly committed to their roles. “Dallas Buyers Club” keeps it real and never tries too hard to make either lead a tragic figure, and only hints once at Ron’s less-than-ideal childhood (a lesser movie would be all over that.) “Dallas Buyers Club” finds inspiration in subjects that initially seem only dark and dismal, and comes out a winner with the help of its actors. 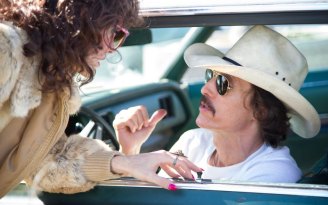