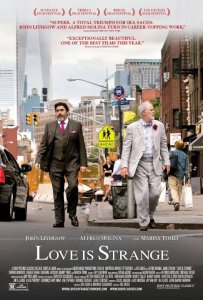 “Love is Strange” is a solid little film whose finale nevertheless left this viewer feeling somewhat half-satisfied, puzzling on whether that was ‘it.’ To be fair, the good far outweighs the bad for this project- writer-director Ira Sachs infuses “Love is Strange” with an honesty and a subtlety that is sometimes frustrating, sometimes heartrending, and the leads perform admirably in true-to-life, non-showy roles.

Ben (John Lithgow) and George (Alfred Molina) are an aging gay couple who have just tied the knot. Good for them, bad for George’s career- the Catholic School where George teaches music is displeased that George’s sexuality is now made known to everyone by his getting married. George is a believer and a well-loved teacher, but what does that matter to the fat cats who run the show, and are overeager to push George back in the closet?

Nothing it seems. Worse, now Ben and George can’t keep up payments on their apartment, so they are shuffled off to live with friends and family. Absent-minded artist Ben goes to live with a distant relative where he is treated like an unwanted stray and an annoyance in their cramped apartment. George, on the other hand, stays with a gay cop couple who party long and hard day in and day out, befuddling the old man.

“Love is Strange” is a quiet film with lots of static long takes, and it seems ‘real’ to a startling extent. Ben and George’s relationship is very sweet and passionate without being graphically sexual. The movie also has some interesting things to say about fidelity and ageism, and the value (or lack thereof, in some cases) of family.

I would have liked a bit more resolution to the plotline concerning the boy (Charlie Tahan) stealing the French books (though the father (Darren E. Burrows’) hysterical and accusing reaction is priceless.) The lovely Marisa Tomei plays the role of the boy’s mother and the wife of the relative taking Ben in, and the whole cast does a uniformly great job, including the young boy actor as the moody teen who doesn’t take to Ben’s presence famously.

The more I think about the ending, weirdly, the more ‘right’ it seems- the tenderness and the grit and the bittersweet melancholy of it- and my initial miffed reaction to the speediness of the wrap-up has more to do with my own personal response than anything to do with the quality of the writing or directing. That said, I think there could have been a little more added to the conclusion.

I don’t think “Love is Strange” is one of the best gay-themed movies of all time, but it certainly holds it’s own in a subgenre whose movies range from fantastically good to woefully poor. Lithgow and Molina portray aging New Yorkers equipped with a tenderness and a good humor that spits back in the face of mounting obstacles. If you’ve never heard about it until now, you’re not the only one; “Love is Strange” was miserably under talked about, and it’s certainly ‘strange’ that it hasn’t gotten more attention than it received. 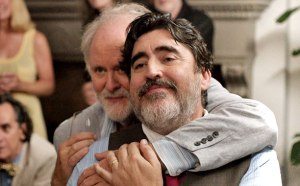