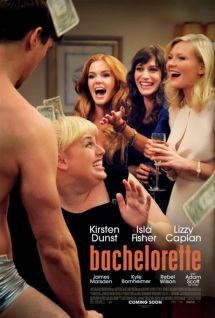 “Bachelorette” is the worst kind of comedy- tacky, shallow, mean-spirited, and unfunny. The venomously unlikable cast of characters will grate on you after the first five minutes… by the 80 minute mark, they’re Hell. These gal pals will remind you of everything you don’t like in human beings, hardly the tone to set for a romantic comedy.

Regan (Kirsten Dunst,) Gena (Lizzy Caplan,) and Katie (Ilsa Fisher)- ditzy, cruel, and devoid of charm- prepare for their friend Becky (Rebel Wilson)’s wedding. Infuriated that the ‘fat girl,’ who they always had a demeaning attitude toward, got engaged before them, the clueless three find themselves in big (and well-deserved) trouble when they rip Becky’s wedding dress while playing a cruel joke.

“Bachelorette” piles joke after unfunny joke about drug addiction, abortion, mental disabilities, cancer, obesity, and Autism onto a weak script. Not only are these jokes not funny (I never let out more than a weak chuckle throughout this Godforsaken film,) they’re also tasteless and offensive. I might sound like a prude, but believe me, I’m no more humorless than this film is.

This film’s saving grace (besides sole non-mean girl Becky)- Joe (Kyle Bornheimer,) a drug-addicted but kind software designer and friend of the groom, who has an unexplained (and unexplainable) crush on dingy head-case Katie. I would regard a romance with Katie as akin to a shotgun pressed against Joe’s head, but hey, maybe love will win out.

The inexplicable second second half of the film treats serious and grim issues (one character’s abortion, and another’s suicide attempt) like Friday night at the comedy club, except without the alleged humor. The sitcom-ish handling of the whole thing turns sour almost immediately. There’s a difference between dark comedy and just beating the dead horse with things that are not funny.

Something being controversial does not necessarily make it humorous, as this filmmaker has yet to learn. Also, making a character damaged does not automatically make her likable… sometimes you just end up with a damaged bitch, as “Bachelorette”‘s gal’s prove. Hateful humor a good film does not always maketh. Goodbye.