Nothing to see here, ladies and gents. “V/H/S” is a appallingly bad and nauseatingly shot fright flick, marred by misogynist overtones and 0% (and I do mean %0) character development. The film is geared toward predominately male teenagers with short attention spans, sporting sickeningly schizoid cinematography and and gratuitous boobie shots (most of which are in sexually violent or exploitative context.)

In the core storyline, A group of miscreants break into a house after being hired to steal one videotape. We have no sympathy for these people- between their abusive treatment of women and their grating stupidity, we’re actually rooting against them. When they break in, they find a stack of V/H/S home movies… and a corpse. Unfazed by the body of an old man resting in an armchair, they begin to view the videotapes. Each one is a supposedly real horror short.

Is it really necessary to drop the F bomb in every sentence? I mean, I love my expletives as much anybody else, but throwing it around willy-nilly makes you sound like a 13-year-old trying to be ‘edgy.’ The boys are disgusting pieces of work, but watching their well-deserved demise, satisfying as it might be, is not enough to save this terrible short.

The majority of these shorts are wretchedly bad to pretty mediocre, with the exception of one. Here’s a wonder- Ti West, who made one of the worst shorts in the similarly themed horror anthology “The ABC’s of Death”, also directs the segment that saves this movie from being a total disaster. “Second Honeymoon,” starring Joe Swanberg and Sopie Takal, is a surprising and competently acted short that kept me guessing throughout.

The short with the aliens had potential, but just left too many unanswered questions for my liking. The others were utter crap. The shaky cam gave me a headache and a stomachache. The dialogue was a string of childish obscenities. There was no depth to the characters. I have not seen a movie in a long time with a cast of characters I liked less. This movie is so, so bad. Avoid it like the plague.
Rating-
3.5/10 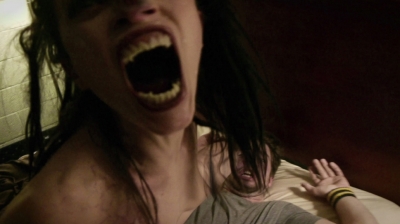