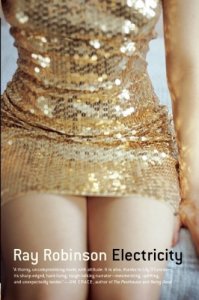 Lily O’Connor’s neurology is a wild, untamed beast that knocks her on her face time and again. Afflicted with epilepsy, Lily knows the condition is more than the general public believes it be, and she determined to live as normal a life with the condition as possible. Saddled with a rough (and I mean rough) family (her mother is entirely to blame in causing the injury that led to her disorder, in an act too ghastly to mention,) Lily has learned to hide the hurt away, armed with a misanthropic wit. But the death of her beastly mother, grouped with the arrival of her gambler brother and the mystery of another sibling’s disappearance, shakes up Lily’s life in ways she never could have imagined and sends her on a quest for reconciliation on the dirty, chaotic streets of London.

So, apparently this is a movie now. It’s hard to picture how a film adaptation would work, to be honest. Electricity is a otherworldly experience, an journey through the senses shedding light on a condition no one would wish on themselves or their loved ones. How will a movie give us such an unyielding look into this woman’s mind? How will a movie explain how the seizures feel? But the miracle of this novel is that Lily O’Connor is so much more than her disability.

She’s tough, complicated, seriously flawed but fundamentally decent. The strength of Lily’s character ensures that Electricity will not a textbook slog through issues of disability and dignity. Also, I don’t think I’ve ever read so much onomatopoeia in one book. The book has an interesting feminine perspective on sexuality, as well as a heartbreaking take on sexual abuse (what if I didn’t fight back! What if I liked it?)

Lily believed she was in love with her mother’s boyfriend when she was about nine years old, and appreciated the attention in a time when she was all too often ignored and overlooked. But does that make it any better? Of course not. Sexual misconduct with a preteen is abuse whether or not the child thinks they enjoy it or not. In a way, Lily has to move past her own feelings and perceptions about the event just as much as she has to move past the abuse itself.

Lily is often a hard character to like. But you can’t hate her. You just can’t. She’s too vulnerable and damaged and real for that. However, the circumstances of her upbringing seemed a little too dire at times. That coupled with her truly horrific experience with men (only her wig-donning mentor, Al, emerges unscathed) makes Electricity a sometimes disturbing read. Lily is an often sexually ambiguous character; she reports to enjoy sex with men (although she can’t climax,) while her less-than-sisterly affections for her lesbian buddy Mel makes the reader wonder what side of the fence she’s really on.

The only parts of the book I felt were lacking were the sex scenes between Lily and her boyfriend, Dave. Here we are subjected to analogies such as “He licked my breasts like lollipops” that fall short on insight into a woman’s experience of sex. They were a little corny, to be frank. They didn’t quite fit in the otherwise smooth, flawless jigsaw puzzle that was this novel. Mostly, what stands out in Electricity was the close inside view of a misunderstood condition and Lily’s unique, dialect- and profanity-salted voice. Lyrical yet not tweedy, Electricity is a engrossing read.

I’m not the biggest fan of Alfred Hitchcock. There. Now that I’ve spilled my dirty little secret (and turned in my film buff card,) let’s get this show on the road. Of the few Hitchcock movies I’ve seen, “Suspicion” was the most outdated, watered down, and completely exasperating. The protagonist, a bookish woman (Jean Fontaine) facing spinsterhood who marries good-for-nothing playboy Cary Grant, is a completely ineffectual Mary Sue.

Now, I’m not going to cry sexism (this is 1941, after all) but it’s both annoying and eyeroll-inducing when this particular damsel in distress who’s written to be an intelligent, competent woman vacillates between lovesick euphoria and the abyss of despair. The plot revolves around Lina (Fontaine) suspecting Grant of murder.

This suspicion is exacerbated by the inopportune death of Grant’s none-too-bright business partner Beaky (Nigel Bruce) right after he and Grant close a deal. I suppose Beaky in all his ineptitude is supposed to be comic relief, before he ‘meets with an accident,’ so to speak.

Grant’s character, Johnny, is a smug jackass that repeatedly calls Lina ‘Monkeyface’. She loves this ‘term of endearment’, and coyly sidesteps courtship for a while only to fall head over heels in love with him seemingly seconds later. If a guy called me ‘monkeyface,’ I can tell you he’d be smart to keep his hand cupped over his crown jewels because I know where I’d be embedding the pointy part of my shoe. However harsh my rant might sound, the portrayal of the main character isn’t the biggest problem I have with this film.

But that ending, Man! I know the censors changed it from a less wishy-washy conclusion that was included in the original script and the book on which it was based (though to be honest, the book’s ending sounded pretty lame too.) But in fear of offending 1941 audience’s delicate sensitivities, the censors slapped this with the biggest cop-out I’ve seen in a long time.

I sat through the not-so-great motion picture in order to get to the good part, which was watching Lina sack up to face her odious hubby. All that build-up, and… dang! I was disappointed, massively disappointed, to see that they took the utterly boring way out.

Cary Grant and Jean Fontaine did good jobs bringing this rather flat film to life, I suppose, but their competent performances are not enough to save what is, for me, a sub par Hitchcock excursion into so-so suspense. I heard they might be redoing this, and despite my aversion to remakes, I might like to see the results.

I was thinking while watching this movie that if they took the general premise of “Suspicion” (not necessarily a remake per se,) changed the ending and  added a really kick-ass heroine (or at least a heroine with some common sense,) they might have something here. Oh well. Hitchcock can be good, and I will continue to watch his movies in hopes of finding one I really ‘click’ with.