Shane Meadows is one of my top favorite filmmakers, so although “Twenty Four Seven” is not bad at all, it’s a bit of a disappointment with my expectations set so high. It is a well-intentioned independent feature featuring Meadows’ trademark working-class Brits, and sporting a slightly confusing ending. It lacks Meadows’ usual intensity, and although it has a pretty decent story to tell, I often found myself getting distracted.

Good-natured and dedicated, Alan Darcy (Bob Hoskins) starts a boxing club to bring focus and passion to the kids in his lower-class town’s lives. The kids, who have little to do but mingle and get into trouble, are initially wary of Darcy’s enthusiasm, but eventually they find that boxing is a good outlet for their rage and frustration.

When Darcy borrows stolen money to help set up his boxing club, I expected something to come of it, but nothing really comes of the plot thread. I liked Darcy, Tonka, and Tim but didn’t find the characters as compelling as in some of Shane Meadows’ other films, like “A Room for Romeo Brass,” a film I gave 5/5 stars to.

The more I thought about it, the more I had problems with the ending, which I found increasingly unclear. What exactly happened to a certain despicable character, and are we supposed to believe that that certain someone would have a road to Damascus and show up at the funeral at the end? Pfft.

Nevertheless, Bob Hoskins did a good job playing a compelling character, and Shane Meadows’ potential was evident from early on. The home-video footage of the young boy at the beginning was not really crucial to the plot, but I liked it anyway as it fit the mood of the scene.

I would only really recommend this movie to Shane Meadows fans who are curious how his career progressed over the years. It was worth watching once, definitely. The absence of Paddy Considine (“Dead Man’s Shoes”) or Stephen Graham (“This is England”) was disappointing, but Bob Hoskins did a good job as the idealistic protagonist. An interesting movie, if not exactly fulfilling.

Shane Meadows knows how to do a slow-burner. One of Britain’s most powerful filmmakers, Meadows is a master of racketing up the tension in a seemingly ordinary situation. Never stupid, never sensational, he casts his unblinking eye on modern life in the UK and the fragilities of human relationships. If I had to choose between Meadows and Mike Leigh, I would pick Meadows, every time.

“A Room For Romeo Brass” is about how an ordinary friendship can undergo extraordinary duress when a dangerous third party is added to the mix. Two preteen friends, white Gavin and mixed-race Romeo share a brotherly bond that is equal parts camaraderie and constant teasing. Gavin (Ben Marshall,) called ‘Knocks,’ has a bad back and a limp, and is in transition to another surgery.

He’s always up to a bit of mischief, and Romeo (Andrew Shim) is his softer-hearted other half. When a man named Morell (a very young Paddy Considine) rescues Gavin and Romeo from some bigger boys, he seems like a harmless, if eccentric, addition to the group. With his ‘Simple Jack’ haircut and halting speech, he doesn’t readiate ‘cool,’but he is friendly and can tell a sensational story like anyone.

The thing about these kinds of stories is, if they sound too good to be true they probably are, but this matters nada to the boys and one of them, Romeo, is sucked in by his dynamic personality. Gavin thinks that Morell is a sucker and good for a mean practical joke. He’s deadly wrong. As Morell reveals a dark, violent side, Romeo and Gavin’s friendship is tested to it’s outer limits.

Shane Meadows found two good little actors in Shim and Marshall, but Considine is the main draw here. Considine, who would later astonish audiences, including myself, in Shane Meadows’ grungy revenge indie “Dead Man’s Shoes”, puts a unique spin on a character who is probably suffering from an undiagnosed mental disorder.

Like “Sling Blade”‘s Karl or “Buddy Boy”s Francis, Morell’s uniqueness is electrifying to watch. At times I was wowed by this apparently simple man’s ability to coerce and manipulate, and wondered if his limitations were a ruse and he was, in fact, a very clever psychopath. The truth is much more complicated.

Wait for the precise moment when the up-til-then likably dotty Morrel becomes suddenly sinister. It’s mind-blowing. “A Room for Romeo Brass” glues your eyes to the screen, and tells a intense story about friendship and betrayal, about a wolf in sheep’s clothing who fleetingly wins- if not earns- our sympathy nonetheless. With it’s three-dimensional characters and incisive writing, it’s nothing less than riviting. Bravo, Shane Meadows. Keep them coming. 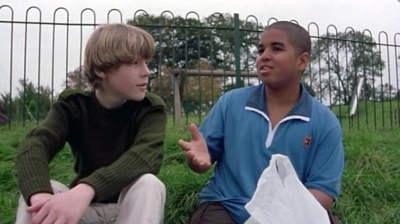