Frank Oz’s 2007 madcap comedy “Death at a Funeral” is a movie that did not need a remake, in the opinion in yours truly, and the wise move on your part would be to rent this version immediately and avoid the pointless rehash. 2007’s version finds the dysfunction taking place at a British country house, when the patriarch of a well-to-do family dies and friends and relatives cast away simmering tensions to attend his funeral.

Daniel (Matthew MacFadyen) is the dutiful son, perpetually disregarded in favor of his often absent brother (Rupert Graves.) Simon (Alan Tudyk) is the deceased man’s niece’s boyfriend, who trembles at the thought of coming face to face with his beloved (Daisy Donovan)’s disapproving father. Simon mistakenly consumes a hallucinogenic concoction in an attempt to ‘calm his nerves’ and spends the rest of the movie in a midst of a psychotic breakdown. You may think the portrayer of Simon will not be able to consistently draw laughs when handed out such a tough and over-the-top role, but Alan Tudyk (from the terrific TV series “Firefly”) may just win the honor of giving the most uproarious performance in a very funny movie.

The family’s issues are exacerbated by a lecherous guest (Ewen Bremner,) a mysterious and latently homosexual dwarf blackmailer (Peter Dinklage, who certainly showed potential before his breakout performance in HBO’s “Game of Thrones,”) and hallucinogens that get passed away like a game of ‘hot potato.’ During all this the guests attempt to keep a stiff upper lip- perfectly British, but the harder they try to give the dead man a ‘dignified send-off’ the more complicated things become.

This is a ensemble comedy, and even the actors who have somewhat boring roles (as a posed to drug-addled Tudyk and the socially hopeless hypochondriac Howard (Andy Nyman))- like Matthew MacFadyen- are very good with the material they’re given. I can’t think of a single weak spot in the cast. I couldn’t stop laughing at the crazy situations that befell this upper-class family when they were trying to behave like good, impeccably polite Brits. Great use of physical comedy, dark humor, and funny dialogue.

Frank Oz directed the comedy “In & Out” with Kevin Kline in the 90’s- which, despite occasional laughs, can’t compare to this as far as hilarity is concerned. This is not a movie to watch with your grandmother- there’s sexual content, language, mordant humor involving grief and death, and toilet jokes. Still, despite off-color content that might be attributed to American cinema , it’s still extremely British in style. The humor is in the fact that you can sympathize with and relate to the characters’ mortification and embarrassment while still laughing at them and not taking it too seriously.

If you’re not too sensitive about good taste (although I’m probably making it sound racier to the Liberal viewer than is necessary) I highly recommend this farce. The trailer truly doesn’t do it justice. Thanks to this movie, I am inspired to grow up into a old person of Uncle Alfie (Peter Vaughan)’s degree of meanness, hitting people with my cane and whatnot. You haven’t really lived until you’ve spent your twilight years being an insufferable ass. Anyway, I really hope my review inspires you to pick up this movie, as it is a riot with an unbeatable cast.

Welcome to the life of Brit teen Hallam Foe (Jamie Bell), whose many odd habits include using his late mother’s makeup as war paint and turning a pair of binoculars on women breastfeeding babies, sexual acts and whatever else he can find.

Ever since his mum, Sarah, was found at the bottom of the loch beside their home, Hallam has refused to consider the incident a suicide but instead blames dad’s new wife Verity. Plus, he lusts after new mom despite his suspicions and writes about his fantasies up in the tree house where he has decided to live. Malajusted doesn’t begin to cover it.

When a violent confrontation with step-mom turns disturbingly intimate, Hallam decides to bail from his family’s large estate and flee the repercussions. He ends up in the city, sleeping in a derelict part of the hotel and making money working a grimy kitchen job.

When he meets a woman who resembles (who else?) dear dead mum, he turns his voyeuristic gaze toward her and becomes involved in a nasty sexual triangle of blackmail and adultery, all while trying to get Verity turned in for the murder he is convinced took place.

Jamie Bell, who has done quite a bit of growing since his role as a ballet-dancing youngster in Billy Elliot, turns in an excellent performance as a clearly disturbed young man who veers between creepy beyond redemption and pitifully sad.

I was surprised by a reviewer’s claim that this film was inferior to the slightly silly Shia LeBeouf thriller Disturbia. While decently made, the latter film had a certain tackiness that made it hard to take seriously. The director treats the story of Mister Foe with a seriousness that helps the viewer buy into it.

If I had detected a smirk in the production, it would have sunk fast. Although this movie is ultimately has a riskier construction, is more disquieting, and has better-drawn characters than Disturbia, it was not without scenes of ridiculous implausibility. To prove my point, ladies, I present a scenario.

The Situation: An unbalanced young man grabs you by the throat and accuses you of murder.
Your Reaction:
a. Try to talk some sense into him.
b. Fight your assailant by poking his eyes, pushing, or kicking him in the balls.
c. Jerk away and scream for help.
d. Consider his closeness liberation for your lust and grope him.

Only a die-hard masochist would pick d, so when the normally rational Verity uses the situation as a chance to cross forbidden boundaries, the originally disturbing situation becomes perversely silly. Do things like that happen outside of S&M soap operas?

I’ve always been a sucker for cinema that avoids formula, so I’ll give the gaping problems in the film a break. I’d say the best thing about the whole movie was Bell, who is an actor worth watching. The director? We’ll see.

By the end, the scarily intriguing character of Hallam avoids seemingly inevitable catastrophe, and the viewer thinks the story would have probably ended in a disaster similar to Ken Loach’s Sweet Sixteen. Like Ben X, Mister Foe takes the happy route, but since that it’s unlikely to happen except through a director’s mercy, it seems a hollow victory.

“Julien Donkey-Boy” is an occasionally emotional, mainly tedious foray into the art of Dogme 95, laden with grainy visuals and non-existent plotting. It recalls the much better film “Buddy Boy,” which came out the same year. “Buddy Boy” director Mark Hanlon knew how to engage your interest and make you care about his main character, despite his shortcomings.

Julien is a 20-something paranoid schizophrenic played by Ewen Bremner, one of the most underutilized character actors of today. Julien lives with his equally disturbed father, younger brother, and sister, who he has impregnated before the film’s beginning.

Uncomfortable yet? The whole movie works to make the viewer feel discomfort while also invoking sadness and emotion. At this it is only moderately successful. The dialogue is often random and directionless. The experience of the film is akin to having hundreds of puzzle pieces of differing shapes and sizes, none of them fitting together in the least.

While watching, you come to a crossroads- should you spend a indefinite amount of time trying to put together the pieces, or should you leave the goddamned thing for somebody else to solve? The visuals of “Julien Donkey-Boy” are willfully awful, presumably shot on a home video camera bought from the bargain bin of Best Buy for a total of five dollars.

Ewen Bremner does an excellent job as Julien, but although Julien isn’t innately evil or unlikable, it’s hard to emotionally invest in his plight. In fact, the movie has its meaningful moments, but most of what is has to say isn’t particularly innovative or profound, and it’s hard to feel many emotions other than bewilderment and disgust.

The film is dedicated to director Harmony Korine’s schizophrenic Uncle Eddy, and although I hate to criticize a personal film-making project (unlike the soulless Hollywood money grabbers I love to have a go at), I must. “Julien Donkey-Boy” is hard to sit through and willfully incoherent, like a cross between a David Lynch throwaway project and a bad acid trip. It is one of the few movies I can honestly say had very little point, and isn’t that a shame? Not for the majority of sober filmgoers. 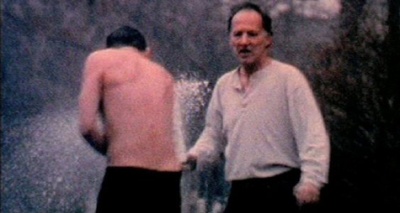