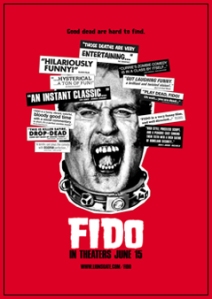 In “Fido”‘s candy-colored, whimsical 50’s-esque  world, zombies are obedient servants of mankind and as gentle as a family dog- just keep those pesky electronic control collars turned on so your faithful friend stays domesticated and servile! Zombie-phobic Bill (Dylan Baker,) haunted by the years when the undead ran rampant before the collar was invented, is not pleased when his ditzy wife Helen (Carrie-Anne Moss) brings home ‘Fido’ (Billy Connelly,) a amiable walking corpse to serve their every need.

Timmy (Keysun Loder,) their son, quickly makes friends with Fido, but Bill’s worst fears are realized when Fido eats Timmy’s crotchety old next-door neighbor Mrs. Henderson (Mary Black) in a freak accident. But, gee, Mrs. Henderson wasn’t a very nice old bird, and Timmy is determined to keep his best pal there at home with him, where he belongs, and is willing to cover up Fido’s kill and the carnage that follows.

“Fido” is very funny, cute and charming (in a dark, sweetly diseased way,) and a wicked satire of 1950’s manners and customs. I honestly don’t know why it didn’t get more attention at the box office. The costumes and sets are eye-poppingly colorful and stand sharply in contrast with the decomposition of the monsters. And Billy Connelly- who knew that an actor could make his character of an occasionally flesh-eating zombie a lovable and empathizeable character?

I’ll admit it, guys- I was rooting for ‘Fido’ to get away with his massacre of the next door neighbor all the way through. With a masterful mix of body language and facial expression, Billy Connelly creates perhaps the only zombie worth squeeing in adorableness for in the history of cinema. If you’re anything like this slightly wacked viewer, by the end of this movie you’ll want to envelop Fido in a warm hug- cautioning, of course, that his collar is fully functional.

Carrie-Anne Moss and Dylan Baker are a riotous pair as they provide a send-up of 50’s values with a dark and homicidal twist. Tim Blake Nelson delivers as a oddball neighbor with an overly familiar relationship with his female zombie (it’s not like it’s necrophilia… right?) If “Fido” pales in one respect, it’s that zombies are an overused cultural icon and it seems to dim slightly in comparison to the truly great zomcoms like “Shaun of the Dead.”

It’s not particularly novel in terms of it’s themes theme (either as a satire of nondescript 1950’s suburbia or a comedy featuring zombies as some of it’s main players,) but it delivers on it’s oddball premise with some great gags and jokes. There’s an uncanny weirdness lurking behind it’s goofball amiability- maybe this outwardly silly satire is darker than it lets on. But the inherent corniness of the violence- like a wacky midnight movie- ensures that “Fido” should be enjoyed by viewers of twelve and up- especially those who are seasoned on slightly edgier horror fare.

You may have overlooked this movie when it passed through theaters (not with a bang, but with a slightly piteous fizzle,) but “Fido” has the potential to become a cult classic if it gets attention with lovers of cheesy horror and slightly subversive cinematic oddities. It’s dry, dark humor earns it a place in my heart- even if it’s not as memorable as “Shaun of the Dead” or even “Zombieland,” it’s the little movie it could with some actual thoughts in it’s twisted little head- a sad rarity in modern horror. For an opportunity to root for the zombies and their unholy cravings, watch “Fido.”