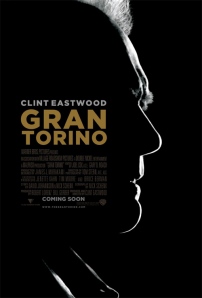 Actor/director Clint Eastwood stars as Walt Kowalski, a grizzled old bulldog of a man. Truculent and more than a little racially biased, Walt is the recently widowed father of uncaring sons, who would like nothing more than to put him in a rest home and get his house and his things. Old Kowalski laments at the state of his neighborhood, which is getting bought out by racial minorities, and is starting to attract an unsavory gang element.

When shy, bookish Hmong teenager Thao (Bee Vang) is pressured by his thuggish cousin into attempting to steal Walt’s beloved Gran Torino automobile (which is, along with his lab Daisy, the only thing Walt truly loves) as a gang initiation, Walt thinks his relations with his neighbors have hit an all-time low. But an unexpected friendship with the youth may be a reprieve for both of them.

Protecting Thao and his strong-willed, bright sister Sue (Ahney Her) puts Walt at odds with the local gang attempting to indoctrinate Thao and leads to a final, dramatic confrontation. Meanwhile, a well-meaning priest (Christopher Carley) has promised Walt’s deceased wife to get him to come to confession, and habitually visits Walt trying to offer him a Catholic perspective on the events surrounding him.

“Gran Torino” is outwardly a pretty simple movie about a prejudiced man coming to terms with a changing America and learning to value Minorities through the humanity of his neighbors, and all the actors, including the Asian non-professionals, give affecting performances. I noticed that early on there’s a little too much exposition offered by Walt’s family, which is a bit strident but keeps the drama moving at a steady pace, as Eastwood has a lot to cover.

Walt’s family really doesn’t give a crap about him- his bitchy granddaughter (Dreama Walker) tries to convince him to will the car to her when he “like, dies” (she says this right to the old man’s face!) and his grandsons sift through his stuff at his wife’s wake with a marked lack of respect. The kids’ father, Mitch, refuses to hold his children accountable and he and his wife are just as eager to claim Walt’s possessions as their offspring are.

Still, Walt finds a surrogate family, so to speak, with the people he least expected to. Walt is outwardly a pretty typical, ignorant, angry, and surly old man but he does behave in some surprising ways while developing at a believable rate. I’m not completely convinced he had removed the stick from his ass at the end (he still uses a very biased rhetoric, ‘gook,’ ‘slope,’ ‘beaner,’ etc.) but that makes his more believable because if he acted like a Disney character by the conclusion of the movie no one would buy it.

Carley plays one of cinema’s only sympathetic priests and he is appealing, as are Vang and Her. Despite the dark subject matter, there is light and humor allowed into the otherwise bleak story. Clint Eastwood does a good job of bringing Walt to life, and the ending is sad and tender but uplifting and hopeful at the same time.