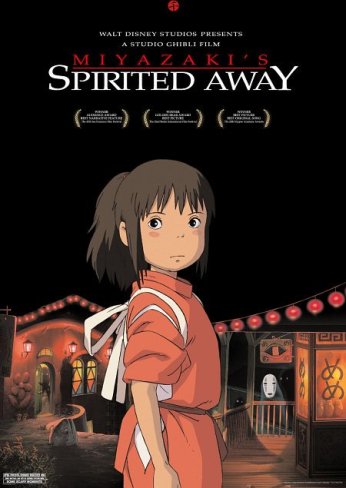 If you’ve never seen anything by master animator and storyteller Hayao Miyazaki, you’re missing out. The esteemed filmmaker has several fantastic films to his credit, and 2001’s coming-of-age fantasy Spirited Away may be his most magical of all. The wealth of creativity on display in Spirited Away more than makes up for it’s occasional holes in plot and character development, and the heroine Chihiro’s wondrous (if sometimes scary) adventures should appeal to both the young and the old.

At the film’s start, Chihiro (voiced by Daveigh Chase) is a somewhat whiny and entitled nine-year-old girl with an even more entitled pair of parents (Michael Chiklis and Lauren Holly) who are moving their moody preteen daughter to a new house. In the spirit of adventure (or so he thinks,) dad takes a short cut and finds himself in what he thinks is an abandoned theme park. He gets out of the car to take a look around, finds an unattended banquet, and he and his wife throw caution to the wind and begin to arbitrarily chow down (sure, wouldn’t anyone?)

Chihiro refuses to partake and is spared the fate of being transformed into a pig, but her parents are not so lucky. Turns out the ‘theme park’ is a bathhouse for the spirits, and Chihiro must get over her orneriness and aversion to hard work in order to save her parents from becoming the next entree for the creatures inhabiting the magical realm. Along the way, she meets a brooding and mysterious boy (Jason Marsden) who moonlights as a dragon, and evades the evil clutches of Yubaba (Suzanne Pleshette,) a malevolent sorceress and overprotective mother of a infant monstrosity worthy of Eraserhead. 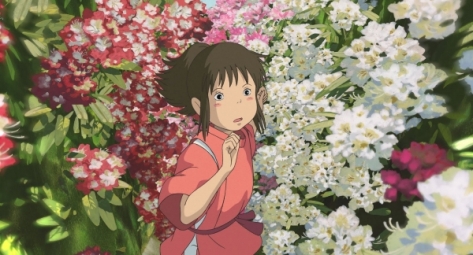 There’s commentary abound concerning (American?) decadence, greed, and laziness, including a creature called ‘No-Face’ who  idly feeds off the materialism of others while becoming increasingly grotesque and corpulent, but Spirited Away never becomes pedantic in it’s nuanced delivery of it’s message. One issue I see with the script is that the supporting characters don’t always have a lot of motivation for what they do. For example, the six-armed Boiler Man spirit (David Allen Ogden Stiers) sticks up for Chihiro shortly after her arrival at the bath house, more or less because the script requires him to.

He’s not developed in a way that this is a particularly feasible decision for him, just as Yubaba’s twin sister is a wildly inconsistent creation. One moment she threatens to ‘tear Chihiro’s mouth out’ if she blabs her secret, the next she asking her to call her ‘granny.’ Whaat? The exceptions Yubaba, whose behavior is unkind, but consistent,  and Chihiro and the boy, Haku, who have a fluid and interesting character arc.

However, Spirited Away is boundlessly inventive and visually stunning; a menagerie of intense color and bizarre creatures that stands up to multiple watches and should enrapture the imaginations of kids and adults alike. It’s certainly not dumbed down to the intellect of a slow five-year-old like a lot of kiddie matinee, it takes it’s young audience seriously and doesn’t treat them like morons;  that’s what’s so great about Hayao Miyazaki as a filmmaker, isn’t it? He trusts that kids will get things and doesn’t talk down to them.

The difference between something like this and the average animated comedy by Dreamworks studios is like the difference between a mountain and a rockpile. Like Pixar’s best films, Spirited Away combines eye-popping animation with memorable storytelling and a genuine sense of wonder to create pure movie making magic. Regardless of whether you’re a huge anime enthusiast, Spirited Away (and by extension, most of Miyazaki’s films) is utterly worth your time. If you like feverishly imaginative fantasy that transports you for a few hours from the mundanity of daily life, you’ll find a lot to love in Miyazaki’s masterpiece. 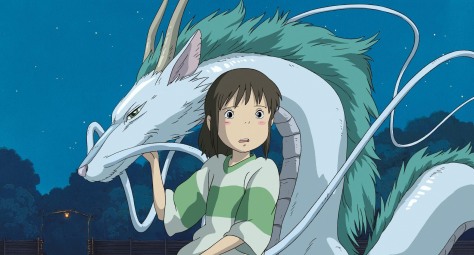