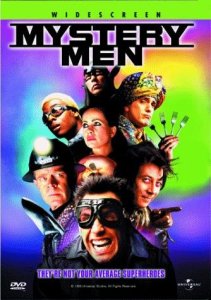 How many movies can it be said are actually so bad they’re painful to watch? There have certainly been quite a few throughout film history, but I tend to watch movies that I like, or at least can tolerate. Oh, I’ve seen my share of stinkers, but seldom have I seen a comedy like “Mystery Men” where joke after joke falls pitifully flat; where even admittedly creative ideas (a superhero who can only turn invisible when no one’s watching) are executed with cringe-worthy ineptitude.

If you go onto Imdb, you will find people desperately exulting “Mystery Men” as ‘hilarious’ and ‘underrated’ and ‘unfairly maligned by the critics.’ Okay. To say something is ‘underrated’ is to imply it has value. Even Ben Stiller hates this movie, which is funny, because he’s one of the worst things about it. The biggest ‘mystery’ is how they got actual actors like William H. Macy and Geoffrey Rush to play in it.

Mr. Furious (Ben Stiller,) The Shoveler (William H. Macy,) and the Blue Raja (Hank Azaria) are desperate superhero wannabes operating in the futuristic Champion City. Their ‘powers’ are debatable- Blue Raja hurls forks at people (nicked from his mama’s silverware drawer,) Mr. Furious gets mad… really, really mad… to no particular effect, and The Shoveler, well, hits people with a shovel, but not particularly well, because superhuman ability isn’t a strong suite with this trio.

They are overshadowed by Captain Amazing (Greg Kinnear,) a snarky, arrogant a-hole as well as the the city’s champion (harkening to the insufferable Captain Hammer and the later- and much more preferable- “Doctor Horrible’s Sing-Along Blog.” The problem is, Amazing doesn’t have any villains to fight to make himself look good, so he poses as his lawyer alter ego Lance Hunt (unrecognizable when he puts glasses on- a contrivance of Clark Kent absurdity) and single-handedly releases maniacal supervillain Casanova Frankenstein (Geoffrey Rush, sporting one of the most ridiculous accents- German? Austrian?- in film history and armed with razor-sharp fingernails) from an institution for the criminally insane.

When Captain Amazing reaps what he sows and ends up in Casanova’s evil clutches, it’s up to Champion City’s three affable superhero-wannabe losers- joined  by some fresh faces- to save the locals from a disastrously malignant machine and a plan for world domination, courtesy of Casanova and his two disco-dancing sidekicks. Although this movie is terrible, William H. Macy doesn’t totally embarrass himself and Hank Azaria is tolerable (how cute were Blue Raja and his mother together?- “Cheerio, Mummy!”)

It just seems like “Mystery Men” is going for very obvious, broad gags (like Paul Reubens as a repulsive little weirdo with a severe speech impediment whose superpower- shall we call it that?- is atomic flatulence.) Hate to break this to the studios, but farts are not quite as funny as they are imagined to be. I mean, I don’t break into hysterical laughter every time someone rips one. The jokes featured in “Mystery Men” are about 1/10 as funny as the writers presume they are, with actors that seem like they are playing an extended game of dress-up on their off time and accidentally got filmed.

Which is too bad, because some of the ideas are pretty good. I thought routinely, “This joke could be funny, if it was put in a funnier context and refined a little.” Champion City was an interesting setting, and the premise could work with a drastically different approach. But ultimately “Mystery Men” is hard to watch, filled to the brim with ludicrous dialogue, insipid characters, and wasted talent. On the up side (?), this movie would make amazing blackmail material– “Send me 50 grand or this gets sent on disc to all your potential employers.” Oh, the horror. But seriously, AVOID. If you rent this travesty, you’ll be sorry. 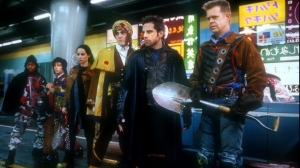 Welcome to the life of Brit teen Hallam Foe (Jamie Bell), whose many odd habits include using his late mother’s makeup as war paint and turning a pair of binoculars on women breastfeeding babies, sexual acts and whatever else he can find.

Ever since his mum, Sarah, was found at the bottom of the loch beside their home, Hallam has refused to consider the incident a suicide but instead blames dad’s new wife Verity. Plus, he lusts after new mom despite his suspicions and writes about his fantasies up in the tree house where he has decided to live. Malajusted doesn’t begin to cover it.

When a violent confrontation with step-mom turns disturbingly intimate, Hallam decides to bail from his family’s large estate and flee the repercussions. He ends up in the city, sleeping in a derelict part of the hotel and making money working a grimy kitchen job.

When he meets a woman who resembles (who else?) dear dead mum, he turns his voyeuristic gaze toward her and becomes involved in a nasty sexual triangle of blackmail and adultery, all while trying to get Verity turned in for the murder he is convinced took place.

Jamie Bell, who has done quite a bit of growing since his role as a ballet-dancing youngster in Billy Elliot, turns in an excellent performance as a clearly disturbed young man who veers between creepy beyond redemption and pitifully sad.

I was surprised by a reviewer’s claim that this film was inferior to the slightly silly Shia LeBeouf thriller Disturbia. While decently made, the latter film had a certain tackiness that made it hard to take seriously. The director treats the story of Mister Foe with a seriousness that helps the viewer buy into it.

If I had detected a smirk in the production, it would have sunk fast. Although this movie is ultimately has a riskier construction, is more disquieting, and has better-drawn characters than Disturbia, it was not without scenes of ridiculous implausibility. To prove my point, ladies, I present a scenario.

The Situation: An unbalanced young man grabs you by the throat and accuses you of murder.
Your Reaction:
a. Try to talk some sense into him.
b. Fight your assailant by poking his eyes, pushing, or kicking him in the balls.
c. Jerk away and scream for help.
d. Consider his closeness liberation for your lust and grope him.

Only a die-hard masochist would pick d, so when the normally rational Verity uses the situation as a chance to cross forbidden boundaries, the originally disturbing situation becomes perversely silly. Do things like that happen outside of S&M soap operas?

I’ve always been a sucker for cinema that avoids formula, so I’ll give the gaping problems in the film a break. I’d say the best thing about the whole movie was Bell, who is an actor worth watching. The director? We’ll see.

By the end, the scarily intriguing character of Hallam avoids seemingly inevitable catastrophe, and the viewer thinks the story would have probably ended in a disaster similar to Ken Loach’s Sweet Sixteen. Like Ben X, Mister Foe takes the happy route, but since that it’s unlikely to happen except through a director’s mercy, it seems a hollow victory.