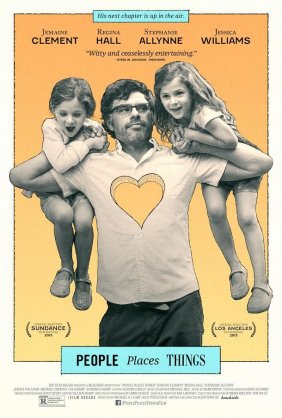 Will Henry (Jemaine Clement) is a socially awkward graphic novelist and a native New Zealander living in New York whose world caves in the day of his twin daughters (Audria and Gia Gadsby)’s fifth birthday parties, when he heads upstairs during the festivities and catches his longtime girlfriend Charlie (Stephanie Allyne) banging her pudgy, affable lover Gary (Michael Chernus)

One year to the day, and Will is still feeling majorly bluesey in the wake of his big break-up. Reluctantly allowed to see his girls on weekends, Will is teaching graphic art at a local college but really doesn’t have his heart in it, preferring instead to immaturely lecture his students on why life, and people in general, totally sucks. Kat (Jessica Williams,) a blunt but good-natured student introduces the lonely Will to her attractive divorcee mother Diane (Regina Hall,) and after a rocky start sparks begin to fly.

However, Will still has feelings for his moody, fickle, and completely exasperating ex, who’s having doubts about her marriage to the girlfriend-stealing Gary, and Will must choose to get over his bitterness and self-doubt and find out how to best serve the interests of not only him, but also his daughters, and ultimately move on.

“People Places Things” is one of those little movies that has completely flown under the radar, and unless, of course, you have a soft spot for the Kiwi funnyman Jemaine Clement, you’re likely to go your whole life without hearing about it. This is a shame, because “People Places Things” is good and true in a way that few American films aspire to be. Will is a very believable character, sometimes delightful, sometimes infuriating, I found myself dubbing him a ‘loser’ over his immaturity and unprofessionalism and at the same time admiring his undeniable love for his kids and his creative spark.

This movie should be called ‘When Nerdy College Professors With Too Much Knowledge and Not Enough People Skills Fall in Love.’ The humor in “People Places Things” is not as much of the ‘laugh-til-you-cry’ variety and more wry, subtle, and oddly relatable, there are no huge happenings in this film and we don’t hold that against it in the least. There is a refreshing lack grand comic misunderstandings in the arguments between Will and his love interest, Diane, they are all messy disagreements that not only very often happen in the real world, they do, every day.

When Will and Diane first have dinner together, Diane callously dismisses graphic novels as an art form. This understandably miffs Will, it is important in a developing relationship for someone to care about the things we’re passionate about, or at least try to understand why we like them. They part on less-than-friendly terms, and the viewer patiently waits for their lives  to converge again, because, hey, maybe these two could have something here. After all, the majority of movie lovers start out on relatively shaky grounds.

The actors do an outstanding job with the material they’re given, and that includes the two child actresses, whose performances are smooth and unforced. They share a genuine comfortableness with Clement, a naturalism that makes us believe they are kin. Jemaine Clement plays a man for whom social skills do not come naturally without the over-the-top ‘geek’ theatrics of popular television programs like The Big Bang Theory and Chuck. He played a similarly awkward protagonist in Eagle Vs. Shark, but his Will is infinitely more relatable and more sympathetic than Eagle…‘s creepy, maladjusted Jarrod.

People Places Things is one of the relatively ‘small’ films that get ignored yearly in favor of bigger, more robust productions. For a bit of wry real-life observational humor, don’t let this charming little comedy pass you by.’ 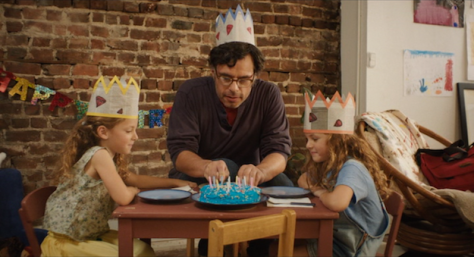