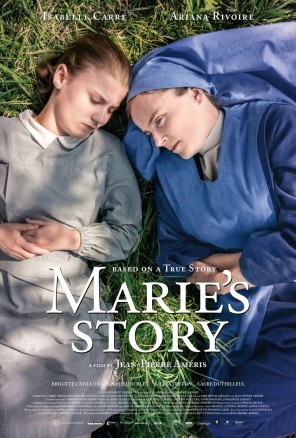 The Miracle Worker in a convent. Sister Marguerite (Isabelle Carre) is a well-meaning but somewhat naive French nun who lives in a convent-slash- school for deaf girls. When Marie Huertin (Ariana Rivoire) arrives, Sister Marguerite as her work cut out for her. Born both blind and deaf, Marie is the wild offspring of working class parents (Gilles Treton and Laura Duthilleul) who, although apparently kind and compassionate, were not up to meeting the needs of their out-of-control daughter.

Marie can’t or refuses to dress herself, eats like an animal, and bites and claws anyone who stands in the way of her achieving her whims. While the Mother Superior (Brigitte Cattilion) believes that Marie can’t be helped and should be sent to an insane asylum or someplace else better equipped to control her unusual behavior, Sister Marguerite takes her on as her own personal project despite being very ill herself. This leads predictably, after much frustration and doubt, to a Eureka moment akin to Helen Keller’s at the water pump and some gradual bonding between Marguerite and her protege.

Marie’s Story is a film which, while very well-acted, should seem familiar to people who hve seen films such as The Miracle Worker, Nell, or Truffaut’s slightly superior oldie The Wild Child. While the character’s disorders are slightly different in the two latter films (having previously been feral humans rather being born blind and deaf,) the set-up is very much the same. The big confrontation between Marguerite and her young charge over whether the wild young thing should eat with a fork strongly echoes a defining scene in The Miracle Worker, while the sequence where the girl is tormented by the poking and prodding fingers of some mean-spirited deaf girls seems reminiscent of the boy’s jarring first arrival to supposed ‘civilization’ in The Wild Child.

It is not surprising that this film should seem uncannily similar to The Miracle Worker, after all, both are based on true stories that occurred around the same time period and both incidents resemble each other a great deal. If Annie Sullivan was a nun who was dying of an incurable disease, well… With all that said, acknowledging that no, Marie’s Story does not feel fresh or particularly innovative or original. it is not a bad movie by a long shot. There’s are some good performances.

Ariana Rivoire does an amazing job as Marie. Not once does she break character, it is easy to imagine that she is really a disabled, nearly feral young girl. Isabelle Carre provides steady support, and while she did not impress me as much as Rivoire (Rivoire admittedly having the more showy role,) she didn’t fail to compel me as a true woman of God. I don’t know if there is a God (being a very skeptical agnostic,) but if there is, people like Sister Marguerite do him proud.

Despite very little dialogue spoken by the character throughout the film, Gilles Treton as Marie’s father touched my heart in a way I can’t exactly explain. You can tell by his look of concerned devotion that he is a good man who provided his daughter with a life much better than most severely disabled people in that era could dare to dream of. He just couldn’t provide her with what she needed most; communication. I found myself liking his character even though he had next to no lines, just call it a hunch, or really good acting on Treton’s part. Although it gets a bit too sentimental at times, Marie’s Story has a good story and strong characters.

It’s a good film in all respects, but it just can’t manage to avoid the pitfall of seeming like ‘another Miracle Worker type’ movie. It doesn’t differentiate from the former enough to give it a true identity. However, if you want a film with Faith-based themes that doesn’t condemn the Catholic church yet doesn’t feel like a proselytizing ‘Christian movie,’this might be a prudent choice. I enjoyed this movie and as a skeptic I consider it a religious movie that doesn’t make a agnostic want to barf. It balances God with a fascinating (if familiar) story and gifted actors. In French. So if you like these kinds of movies, in all likelihood, you’ll enjoy this one. There are far worse films about people living with handicaps to choose from. 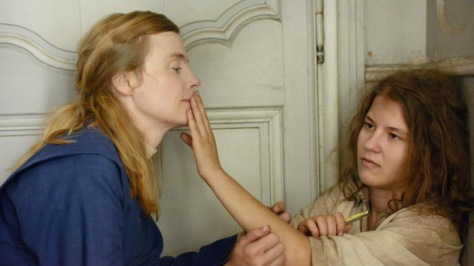