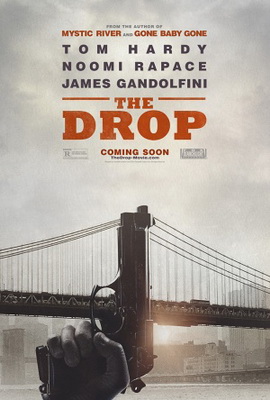 Rating: B+/  In this drama based on Dennis Lehane’s short story Animal Rescue, Tom Hardy plays Bob, a quiet guy with a dark past who works as a bartender and tries to stay out of trouble. In the process of avoiding the temptations of a life of crime, he meets a girl (Noomi Rapace) with her share of bugs in her attic and reluctantly adopts an abused pit bull puppy. But when the girl’s boyfriend (Matthias Schoenaerts) starts pushing Bob to his limit and some mob money gets stolen from Bob’s boss’ (James Gandolfini)’s bar, Bob reveals his capacity for animalistic savagery that lingers behind his mild exterior. END_OF_DOCUMENT_TOKEN_TO_BE_REPLACED 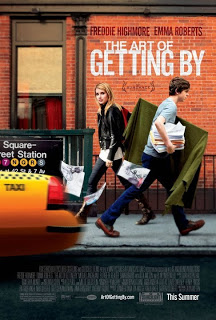 There isn’t anything remotely likable about the protagonist of “The Art Of Getting By,” and he is only an interesting lead if you like entitled, angsty little pricks who think the world revolves around them. I know, I know, most kids his age can be entitled and angsty from time to time, but this kid brings the ‘glib teenaged hipster’ canon to a whole new low.

Never in recent memory have I so wanted the ‘hero’ of the movie to be hit by a delivery truck, or at least go away, just go away, and get out of my sight. It doesn’t help that lead actor Freddie Highmore is about as boring as straight out toast, or that he (warning- spoiler for the cinematically challenged) gets together at the end with bland ‘quirky girl’ Emma Roberts (one of the least interesting young people in Hollywood.)

George (Highmore) is a self-obsessed, pretentious little twit (or twat? How personal do I want to get here?) who constantly thinks about, y’know, death and stuff. He is so busy think about death, life, the universe, and everything that he can’t be bothered to do schoolwork, look out for his future, or do much of anything except doodle is his Geometry books.

Now, these doodles are good, but they’re not good enough to excuse the fact that he thinks he’s smarter, cooler, and altogether better than any other human being on the planet. His dialogue is just too cute to be believed. His sense of entitlement is tremendous. Gee, he’s an upper class rich white kid with no real problems, so he gets to wipe his feet with his hard-working peers.

The scene where his step-dad loses it and kicks his ass was awesome, I just wished it had lasted longer. Even when George’s mom reveals that he’s not such an upper-class kid after all (in fact, they’re bankrupt,) it does nothing to stimulate empathy for George. Although Sally, his cute-and-oh-so-eccentric love interest is supposed to bring about a change in him, I saw no real development.

Another problem is the dialogue. It doesn’t feel raw or natural. It doesn’t sound like something an almost-eighteen-year-old would say. Rather, it sounds rehearsed and stiff, especially coming out of the mouths of non-veteran actors Roberts and Highmore.

So there you have it. I thought this movie was a pile of crap, more aptly named ‘The Secret Life Of Entitled Twits’ than the much milder “The Art of Getting By.” The only character I liked was the art teacher, who, incidentally, didn’t have nearly enough screen time. Just he dominating presence of Roberts and Highmore and the virtual absence of talented actress Ann Dowd (“Compliance”) was enough to make me hate this movie. Unfortunately, it wasn’t all that did. 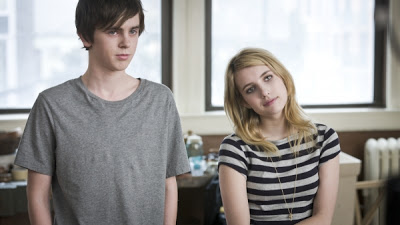