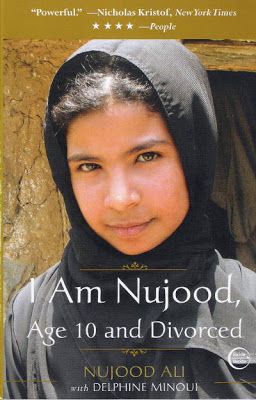 Rating: B-/ Before I read this book, I knew nothing about Yemen, not even where on the map it was, and I didn’t have the foggiest idea of what life was like there. I learned from Nujood Ali’s memoir that Yemen is a Middle Eastern country with the very traditional values that often come hand-in-hand with Islam. In Yemen young girls are often married off at an extremely young age, and that’s what happened to Nujood, when her parents fell upon hard times and her father sold her into marriage to a grown man in order to scrounge up enough money to live on.

Nujood’s new husband promised her father not to consummate their marriage until she had hit puberty, but he had no intention of keeping his promise, and he raped the little girl and beat her with a stick when he became angry with her. Nujood is certainly not the first Yemeni child bride, but she made history by being the first one to file for divorce and win her case. I am Nujood, Age 10 and Divorced is yet another true-to-life story that shows just how good people have it in the U.S.A and the freedom we take for granted.

The main problem I have with this book is that I have my doubts that it was actually written by Nujood Ali. The narrative seemed highly developmentally inappropriate for a ten-year-old, especially one who according to the book just learned the basics of writing in her own language months before this book was written. I would be highly surprised if this book wasn’t almost entirely ghost written, or if the co-author, Delphine Minoui, wrote 99% percent of it and Nujood Ali was barely involved.

I didn’t like how this book was written in a exceedingly childlike style in certain parts, in a way that seemed almost forced (for instance, the use of the word ‘tummy’) and then in other parts vocabulary words were used that I don’t think most high school students would know the definition of. That said, it was still a fascinating true story with a compelling heroine and a great deal of educational value.
Most people in western society of heard of little girls in third-world countries being sold into marriage and it turns their stomachs, but this book makes the reader look at the issue in a new and highly personal way. For the most part, the women in Nujood’s life fail to protect her, and her mother-in-law even participates in the abuse. It isn’t until she goes to her father’s second wife for advice that she gets any help whatsoever. I was deeply impressed by this girl, who is ten at least (she doesn’t have a birth certificate and even her mother isn’t entirely sure of her age,) and her strength and presence of mind.

This book deals not only with child abuse, but also peoples’ complicity and their failure to preventing children’s suffering. This is a problem in Yemen, but it’s also a problem all over the world, including here. The women of Yemen may be oppressed by a patriarchal worldview, but people in a position of power have always been allowed to get away with far more than they should.

I thought the writing style in this book was good, not great. As I said before, I have my doubts that Ali actually wrote it. I found the subject matter fascinating, and I enjoyed learning more about the members of Nujood’s family’s individual dramas as the book went on. Including the dramas of Nujood’s brothers and sisters made the story a more in-depth experience, although the length of the book overall was just under 200 pages.

In Yemen, sexual violence towards women is a huge problem, to the point that Nujood’s dad wanted to sell his ten-year-old daughter into marriage before the inevitable moment in the future that she got raped by a neighbor and ‘spoiled.’ Nujood’s older sister is raped and in order to avoid sullying her family’s ‘honor,’ she is forced to marry her assailant.

I felt sad when I read online that Nujood’s younger sister Haifa, who she was very protective toward, has recently been married to an older man. I will keep my eye on Nujood’s story, and I hope she will grow up to fight against child marriage and violence against women like she wants to. I’m worried for her safety, but if and when she reaches adulthood, I hope that she will have a outstanding life and be able to achieve her dreams. I am Nujood, Age 10 and Divorced is sad but has traces of optimism and hope in the form of it’s spirited subject. It’s an extremely quick read and gives you a look into a part of the world that most people know little about.

15 thoughts on “Book Review: I am Nujood, Age 10 and Divorced by Nujood Ali with Delphine Minoui”