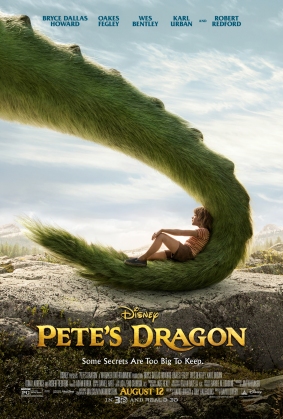 Rating: B-/ I never saw the original version of Pete’s Dragon, and from what I hear from the movie blogging community I wasn’t missing much. The 2016 reboot is a likable enough family film, although most of the human characters are paper-thin. There’s is one big reason to see this movie and that is the character of Elliot, the dragon, who is wonderful. Whereas Toothless from How to Train Your Dragon exhibited catlike mannerisms and Smaug from The Hobbit trilogy is more of a standard, reptilian variety of dragon, Elliot puts the audience in mind of a big, overbearing puppy, to the point of actually being furry rather than having scales.

I’m sure kids will love his antics, and his character works better on screen than any canine-looking CGI dragon with a massive underbite has any right to. Pete’s Dragon is narrated by a wise old coot type played by Robert Redford, who launches immediately into the story of Pete (Oakes Fegley), a little boy who is orphaned in a car crash and lives in the woods for years, protected by the friendly dragon Elliot. Eventually Pete is found and assimilated into the human world by a forest ranger Grace (Bryce Dallas Howard) and her husband Jack (Wes Bentley, also known as that creepy voyeur kid from American Beauty,) which causes difficulties for Elliot, especially when he goes into town looking for his boy.

As Grace becomes a predictable mommy figure and Pete bonds with her and Jack’s spirited daughter, Natalie (Oona Laurence,) Jack’s greedy brother Gavin (Karl Urban) becomes clued into Elliot’s existence and wants to take him prisoner and make money off the novelty of owning a dragon. Thrown into the mix is Grace’s dad AKA the narrator Meacham (Redford,) who has seen Elliot before but was dismissed as crazy by everyone in town, and is pleased as punch that people finally believe him.

It cracked me up how unobservant every human character in this movie was. Pete goes walking (I won’t dignify it by saying ‘sneaking’) from tree to tree watching Grace, Jack and a bunch of other townspeople and it takes the little girl, Natalie, to finally notice him standing laughably obviously within viewing distance. Later, Grace and her family move from room to room without noticing a massive dragon peering through their window.

Oakes Fegley gives a effective performance; although he is definitely no Dakota Fanning, he portrays Pete’s confusion and fear at being placed once again among humans in an believable way. I will say that if you came to this movie you probably don’t particularly care about how the human characters are developed, you came here to see the dragon, Elliot and how Elliot interacts with his environment. Elliot is a marvel, the human backup is just window dressing. I wasn’t sure if I’d like Elliot’s character from the previews, he looked kind of awkward and off-putting, and I wasn’t sure how a dragon with canine features, including thick fur, would work.

However, Elliot turned out to be an expressive and lovable CGI creation, and like Rise of the Planet of the Apes’ Ceaser, a being you were actually invested in emotionally, even though he was created on a green screen. The plot of this film is simple, straightforward, but entertaining and hits all the right dramatic notes. It’s as predictable as they come, but it tells a charming family-friendly story that adults will find appealing as well, even as they acknowledge that the adult actors can, and have, done better work.