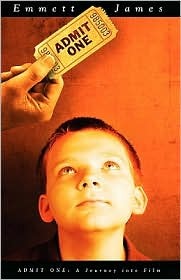 Rating: C+/ For a book called Admit One: My Life in Film, this seems to be more about the ego trip of the author than loving the art  of cinema. Something about the author of this book just rubbed me the wrong way, I guess. You’d be forgiven for not having heard of Emmett James, since the pinnacle of his career seems to have been a bit part in Titanic. James recounts his childhood in Croydon, South London and his appearance on the movie scene, and the thing is, some of his stories are fun, entertaining and well worth telling. It’s not the stories that are the problem as much as James’ air of superiority and smugness.

There’s a fine line between a memoirist shining a light upon his less attractive qualities and him seeming to relish retelling stories in which he behaved like a total tool. I don’t exactly know where the line was crossed here, but I know it when I see it. I went into this book thinking it had a lot more to do with movies than it actualy did. Sure, each chapter is themed after a movie that influenced James when he was growing up, but sometimes the films the chapters are based off of are barely mentioned at all.

Instead, we are thrown in James’ ‘adventures’, which often consist of scams and pranks he pulled off with no regard for other people’s feelings or well-being. I found some of these stories moderately amusing, but I was also aware of how little James seemed to care for the people around him. In one chapter, Emmett James pulls off a series of manipulations in order to get a role in Batman Forever. In the process of trying to get this role, he essentially stalks director Joel Schumacher.

The whole story is harmless enough, except that the author gets the filmmaker’s receptionist fired with his tomfoolery, and shows absolutely no guilt over making the woman lose her job. I thought several times about abandoning this book while I was reading it, but every so often, I would come across something interesting and funny and would decide to keep reading it. I certainly don’t think Emmett James is a bad writer, but I found him to be quite self-centered and egotistical.

I felt that this book was more of a vanity project on his part than an ode to a man’s love of movies, which I went in expecting. I felt about this book much the same way I felt about David Gilmour’s memoir, The Film Club. It was a good concept but the writer’s ego got in the way. I didn’t think Emmett James was as cruddy a person as Gilmour seemed to be, and I occasionally enjoyed his writing style and his sense of humor about his past escapades. I also noticed that Emmett James’ perception of other people was exceedingly negative, and he often poked fun at and name-called people he couldn’t possibly have know for more than five minutes, tops.

I waited for pages on end just to get to the part of the book that was actually about movies. I didn’t like this author enough to want to go on this journey with him. An unlikable author is not necessarily a deal-breaker if they tell a compelling story or have something interesting to say. I’m sure that I would not like many of the writers, filmmakers, and musicians whose work I enjoy if I really got to know them. I enjoy the band Tool, and I was just reading recently what a POS the lead singer, Maynard James Keenan, is to his fans. I don’t think I would like Maynard at all if I were to, say, sit down and eat lunch with him.

The difference, of course, is that it’s easier to separate the artist from the things they create when the project is about something that doesn’t illustrate their worst traits. Imagine Maynard James Keenan sitting down and composing a song about his numerable crappy qualities and how badly he treats his fans. I’ve read a lot of memoirs by very troubled people, but I like to at least feel that the memoirist acknowledges the pain he or she inflicted on other people. I got the feeling that Emmett James, with a few notable exceptions, was a pretty shameless and smug guy.

I cringed hard when he described wanting to go to the Oscars and find ‘a pretty little trophy of his own to bend over the bed’ (not a direct quote, but close.) If there was a sense of irony concerning the way he talked about other people, particularly women, I couldn’t detect it. Just like the way he talked about the girl he had lied to and gotten fired from her job, I didn’t feel there was a lot of personal maturation on his part. At one point Emmett James criticizes the police for arresting him for shoplifting when he was a teen because he didn’t think the item he stole was expensive enough to warrant such a dire reaction.

Long story short, this book has a few funny moments here and there, but there are so many much better memoirs to read out there. I enjoyed certain chapters more than other, but overall, I was underwhelmed and considered the author to be a big petulant child. Emmett James has a lot of growing up to do, and although he has done some interesting things in his life, unfortunately his immaturity is on naked display here. Maybe I expected more talk about the author’s passion for movies or maybe I just wasn’t in the mood for a book like this, but Admit One: My Life in Film was a letdown.