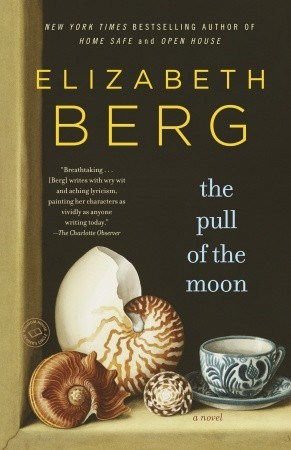 Rating- B/ A deceptively simple, brief little novel, The Pull of the Moon is the lyrical yet straightforward story of Nan, a fifty-year-old housewife who takes a hiatus from the monotony of her everyday life and goes on an aimless road trip in hopes of ‘finding herself.’ The book, told in the form of Nan’s letters to her husband Martin and her intimate journal entries, is not particularly rife with surprises but contains a peculiar charm and grace all it’s own.

People, Nan discovers, are all too willing to open up to another human being who shows genuine, unselfish interest in the joys and difficulties of their lives. Meanwhile, she expresses her childhood sorrows and the ennui that has come along with her hitting middle age and menopause in her personal diary, the pricey turquoise notebook itself an extravagance she wold normally not allow herself.

Living vicariously through other people’s dramas and sorrows, Nan finds herself hopefully anticipating the next chapter in her life, instead of resigning herself to the loneliness and decompensation that often comes with old age. I have to admit that this is not the type of fiction I generally read; I am all for character-driven books but I tend to find this particular brand of domestic fiction a little dull.

However, I really enjoyed the writing in this book, which manages to be simultaneously lyrical and unpretentious. I was both drawn to Nan’s rich inner world and annoyed by her apparent flakiness and self-absorption. Of course, we never hear the husband Martin’s side of the story, which I imagine would be quite a bit different from Nan’s frustrated, occasionally even bitter and  condescending take on their marriage situation.

In some ways Nan is living life the way we introverts would love to live it; speaking and interacting with complete strangers without a trace of self-consciousness, holding the stories and dreams of others inside her. Of course, the other characters, including Martin, are drawn so thinly that it’s hard to make a connection with any of them. This is, emphatically, Nan’s story, and the book itself is less of a thrilling page turner and more of a pleasant and charming diversion with hints of greater depth.

The Pull of the Moon is not a novel that will rock your world, but it is a story that is both joyful and sorrowful, a lot like real life. The prose, for what it’s worth, is beautiful. The main character, despite by all intents and purposes being a average and unextraordinary woman, is both compelling and believably flawed, sucking you into her world, which like her, is outwardly ordinary but also strangely enchanting.

I enjoyed it from beginning to end and even as a twenty-two year old woman who has a long way to go before her change of life pops up, I felt like I could relate to some of her thoughts and feelings. The moments of humor were startlingly effective as well. The sexual frankness portrayed in this book might turn off more sensitive readers, but I found their inclusion made the book feel more real and honest.

People who like psychological fiction, like me, will like this book; people who like domestic fiction will probably love it. I think The Pull of the Moon might have benefited from having a little more to it, readers who like to sit down with a chunkster of a book that will keep them reading long into the night will most likely be disappointed by this novel’s brevity.

I can’t say that anything that happened in this story particularly surprised or riveted me, but it kept my interest from beginning to end, which is saying something coming from a reader who doesn’t usually seek out this kind of book. For a novel with a  very simple, straightforward plot and a lack of suspense or action, it was very enjoyable to read and left me thinking about the basic human need for connection, the world, and my place in it. I don’t think this book will stick with me the way some others have, but it’s tenderheartedness makes it a good choice for people who want a hopeful, but not saccharine, depiction of a woman’s search for meaning.