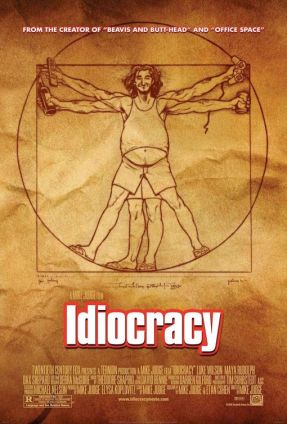 Rating: B-/ Joe (Luke Wilson) is nothing special; he’s startlingly average, a slacker, and doesn’t seem particularly bright or capable of thinking things through any more than is absolutely necessary. His name is no accident, he’s an ‘average Joe,’ and no one thinks much of him or considers him to be anything particularly special. So when Joe is chosen for a military experiment and cryogenically frozen, supposedly to be woken up a year later, it is precisely his averageness and his lack of meaningful relationships with anyone who might start wondering where he had gone to that makes him perfect for the job.

Rita (Maya Rudolph,) a prostitute with a sizable criminal record,  also participates in the experiment, but what the two losers don’t count on is for their cryogenic pods to be abandoned and forgotten and for them to wake up in the year 2500. The catch is that when they come to, they realize that mankind has evolved to be stupider and more ignorant than ever before, making  Joe and Rita literally the two smartest people on earth.

Books, intelligent films, and anything that might stimulate a person’s brain past the lowest common denominator have fallen by the wayside, and mankind has become a bunch of babbling, inane cretins. Understandably, Joe is horrified by how far the human race has fallen, and he enlists a random buffoon (Dax Shepherd) to get him to a time machine which will hopefully bring him home. The people populating the futuristic United States of America are easy to manipulate and trick, but they are also brutish and dangerous in numbers, and Joe and Rita find themselves in a number of absurd situations navigating a world that might not be as far away as one might hope. In fact, you can turn your television on any day of the week and see this kind of stupidity in action.

Idiocracy is not a perfect movie by any stretch of the imagination, and it should probably not be watched by anybody who doesn’t tolerate extreme silliness in movies. There are is potty humor, sexual innuendoes, but underneath the ridiculousness and debauchery is a sharp sense of social commentary so plausible it is almost scary. The problem is not that stupid people exist, but that they are given such a platform to show their asses and that ignorance is glorified and encouraged.

I’m pretty sure director Mike Judge isn’t pushing for sterilization of the most idiotic members of our society, but the film’s early statement on how fast the very dumbest people seem to reproduce is terrifyingly accurate. This satire is not to be taken particularly seriously, but at the same time there is a relevance to the humor that makes it a little more unnerving an experience to watch than it probably should be.

Luke Wilson makes an appealing everyman, and the other actors, although certainly not award-worthy, play their parts convincingly. The plot is convoluted and ridiculous, as Joe unexpectedly finds himself in a position of power and tries to convince the masses that the Gatorade-like power drink they are pouring on their crops is responsible for their escalating food shortage, but the jokes hit home and Idiocracy, while not hugely well-received by the audiences and critics, might find itself a cult following in the years to come.

It’s one of those movies that gets sillier as it goes on but still manages to be humorous and entertaining, thanks to the writing and performances. Anyone who’s seen the state of recent reality TV programs can appreciate the satire of a future where the most popular television show involves a man being hit again and again in the testicles while the audiences howls with laughter (fittingly titled ‘Ow My Balls’)- and the most successful box office hit is simply a full-length film of a bare ass farting repeatedly.

It might seem ironic for the creator of Beavis & Butthead to take aim at this kind of entertainment, but Mike Judge does a surprisingly good job of ridiculing the ignorance of the modern media and many people’s refusal to seek out interesting information or enlightenment. Idiocracy would probably make a good double feature with Bobcat Goldtwait’s pitch-black social satire God Bless America, though Goldthwait’s humor is less silly and absurd and more dark and sadistic in nature.

Those for whom laughing at humanity is a source of great entertainment and comfort will probably enjoy the goofiness of this movie. I don’t see the film as cruel or mean-spirited as much as a humorous warning about the road our society seems to be going down. And it’s not just a matter of poor genetics resulting in more unintelligent people; if people will themselves to be ignorant and mindlessly believe what the internet and the TV tell them without bothering to challenge or think for themselves, a world like the one portrayed in this movie, while exaggerated, seems like it might not be a long way away.