Rating: A/ Y’know, my dad actually had a point when he said that Netflix streaming service has been doing way better than cable TV lately. With a few big failures (I’m looking at you, Adam Sandler,) Netflix has been coming up with a number of good original TV shows and movies, and Stranger Things, a send up of 80’s sci-fi adventure movies that manages to be both disturbing and whimsical, is no exception. Containing only two weak points on it’s cast (the overacted Winona Ryder and the flat Natalia Dyer,) Stranger Things is a treat for Science Fiction nerds and Science Fiction newbies alike, offering a pastiche of references to movies from a bygone era. government conspiracies, parallel dimensions, and gooey alien attacks that will make you squeal with geekdom.

Joyce Byers (the perpetually gesticulating and hysterical Ryder, a spot of mediocrity in a mostly great cast) is a working class single mother with a history of anxiety and depression raising two sons, teenage Jonathan (Charlie Heaton) and prepubescent Will (Noah Schnapp.) When Will suddenly disappears without a trace, Joyce teams up with the alcoholic, pill-popping sheriff Jim Hopper (David Harbour,) who lost his own child to a long bout of illness, and together they plunge into the world of alien life forms and discovering what a local government facility might (Or might not) be hiding.

Meanwhile, Will’s friends Dustin (Gaten Matarazzo), Lucas (Caleb McLaughlin) and Mike (Finn Wolfhard) do a little snooping of their own, and a troubled girl (Millie Bobby Brown) simply known as ‘Eleven’ falls onto their laps. Thus we have two parallel storylines, that of the fast-paced, Goonies-like exploits of Will’s concerned friends, inhabiting a world of school, bullies, and Dungeons & Dragons, and the more adult journey of Jim Hopper and Joyce Byers to find Joyce’s lost son. The mix of child and adult characters work quite well, although this is not a show for young children. On the other side, you’ve got a third storyline about Mike’s sister Nancy (Natalia Dyer) and Will’s brother, Jonathan, doing their own fair share of investigation, which culminates in the disappearance of Nancy’s best friend Barbara (Shannon Purser.) 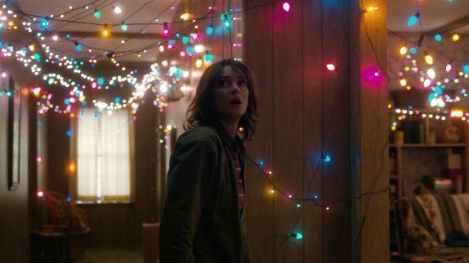 Stranger Things is definitely a show that keeps you watching, with it’s spot-on character development, breakneck pace, and fun, addictive story. The child actors are well cast, and the characters are sympathetic. The show offers a progressive attitude on disability ; Dustin, a strong character in his own right, and the child actor who portrays him suffers from Cleidocranial dysplasia,rendering him almost toothless and unusual in appearance, but the condition is incorporated without making it a huge deal or the sum of Dustin’s character.

The show overall bucks our expectations by being darker, more intense, and more wickedly entertaining than we had originally though possible, and by taking a character (Sheriff Hopper) who we originally see as a loser and a liability and making an unlikely hero and unexpected badass out of him. When we first see Hooper lying dirty and unshaven on the couch with a plethora of beer bottles and pills positioned around him, our first thought is that he will duly play the role of the incompetent, slightly thuggish cop. But although Hopper seems willing to not play by the rules and punch someone in the face when he feels necessary, he turns out to be so much more than the viewer ever expected of him.

I also appreciated how the end of the first season somewhat wrapped itself up rather than going for a total, frustrating cliff hanger while still leaving itself open for the next season. Well-written, well-cast, and all-around well-done; Stranger Things is a show you should see less for 80’s darling and Beetlejuice and Heathers star Ryder and more for the burgeoning talent on display which will hopefully all have long, successful careers after this show is over and done with. I didn’t expect much from this show when I saw the trailer, but it turned out to be an excellent watch even for a person who wasn’t born in the eighties (1994) and doesn’t have a particular affinity for 80’s culture. It’s biggest drawback is that is is only eight episodes long.