Rating: D-/ Why the hell is this categorized as a ‘romance’ on Imdb?!!

To say that Wedding Trough, also aptly known as The Pig Fucking Movie, is not for everyone would be the understatement of the millennium. This dialogue-free, Belgian art-house film tells the charming story of a man (Dominique Garny) who appears to be somewhat lacking in mental faculties who rapes and miraculously (!) impregnates his pet pig. That’s pretty much the extent of the plot, excluding a couple of grisly spoilers, should you be brave (or crazy) enough to look up the entirety of this film online.

Simply put, this movie is a completely bizarre experience, it’s entirety focused on a mentally deficit man’s love affair with a pig, starting out with the besotted fellow lovingly stroking his porcine pal’s nipples and ending with a ten-minute scene of the guy literally eating handfuls of his own shit. Mmm-kay. Wedding Trough is shot in black-and-white, has only one human actor, and is a pastiche of disgusting, Eraserhead-style sound effects and classical music.

The scenes of cropaphagia and animal cruelty are interspersed with long, directionless sequences of the retarded man-boy pervert flying a kite across his property and being at peace with nature. Maybe the only good thing I can say about this movie is that the actor did a wonderful job at embodying his character, instilling him with a kind of vulnerability which is technically impressive, since this movie is all about him having sex with a pig. His childlike facial expressions and body language do bring his character to life to some extent, and some of the music featured in certain scenes is genuinely pleasing to the ears.

That’s it. Those are the only good things I can say about this movie. Some people might claim to see meaning in this train wreck, but trying to find anything redeeming about it is like shoveling through heaps of pig shit with your bare hands looking for gold nuggets that might or might not be there. That is to say, maybe you’ll find a little bit of gold, but is it worth having ten pounds of shit on your hands? For a movie that has been banned and censored numerous times, Christ is this film tedious. At just under 80 minutes, Wedding Trough feels like a lifetime long.

This  movie offers no understanding into abnormal psychology or the human condition, preferring instead to attack us with an onslaught of disgusting images and call itself art. Meanwhile, there are pretentious yet gullible people going, “Hey, you know, this is really different, so it must be art.” Splattering a canvas with human feces is different too, but is it really art? Of course not.

Plus, who knew a film about rampant perversion could be such a snooze? Sure, it’s not entertainment, but did you really expect it to be? The real problem is that it’s pretty close to unwatchable. If you’re a fan of cinema as an endurance test, then by all means, check this out. Otherwise, avoid, avoid, avoid. And don’t let people fool you into thinking this movie makes a profound statement about, well, anything. You could find more profundity at the bottom of a toilet. 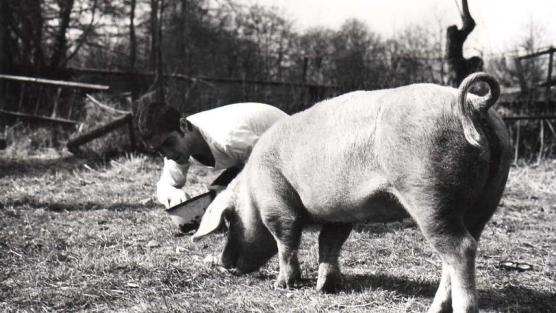