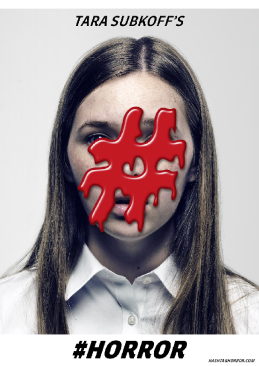 Rating: D/ A failure on almost every conceivable level, #Horror has one of the most confused scripts I’ve ever had the displeasure of encountering. It’s a woeful movie that doesn’t know what it wants to be; a slasher movie? a meaningful teen flick about cyberbullying? A satire? The movie just kind of drags on until it becomes stagnant and features a group of loathsome characters that do nothing to arouse our curiosity or engage our sympathy. Yes, in this movie, I wished bloody homicide on a group of twelve-year-old girls. Thirty minutes in,  I wanted everybody dead, and fast.

#Horror starts out with a bloody murder, establishing itself as a slasher movie, or at least a movie with vaguely slasher-like ambitions. After a man is murdered in a car by an unseen killer, we meet Sam (Sadie Seelert,) an adolescent girl who is going to a sleepover with some rich mean girls. These girls are led by Sofia (Bridget McGarry,) a queen bee obsessed with a cruel social media game. The two girls are joined by Cat (Haley Murphy,) the weird girl no one really likes, and three anonymous tween girls, known only by a handful of superficial traits (for instance, Georgie (Emma Adler) is a fat girl who loves to eat, and even though the movie claims to be against fat shaming, Georgie is defined solely by her ability to pack away the cupcakes in absolutely any situation, no matter how dire.)

The first half of the movie, save the first five minutes, is kind of a depressing drama about disaffected teen girls at odds with each other and themselves. There’s a certain rawness to some of these scenes, although there’s a marked lack of subtlety to the way they’re presented. Then the film devolves into slasher nonsense, and by the time the twist ending comes around, not only did I not care, the climactic reveal didn’t make a bit of sense. The tween actresses give their best shot to a mediocre and nonsensical script, and Chloe Sevigny is fine in a small part as one of the girls’ mothers, although Timothy Hutton chews the scenery ferociously in a endlessly annoying supporting role.

The biggest problem with this movie is the confused plot and the jarring tonal shifts. The screenwriter clearly didn’t know what they were trying to do and the constant Candy Crusher-like internet visuals exploding across the screen are distracting and irksome. The girls just kind of hang around for a good hour before the carnage begins, and there are zero scares to be had in the ridiculous finale, which incorporates girlish screams and shaky cam to middling effect. It’s like the filmmaker wanted to say something deep and profound about the iphone generation and our disconnect from real, meaningful relationships, but this loud, crass, stupid movie has approximately the depth and emotional power of a laundry detergent commercial.

I don’t think a movie or a book needs traditionally likable characters to be good. Take American Psycho, for instance, a pitch-black satire starring Christian Bale as a chainsaw-wielding, hooker-butchering serial killer. We don’t like Patrick Bateman, Bale’s character, but he has a certain something that makes us want to keep watching. He’s despicable. But he’s not annoying, he’s not physically exhausting to watch, and he’s certainly not dull.

If you want to watch a so-called horror movie that’s 90% a bunch of awful tweenie girls we don’t care about going at each other’s throats tacked with a half-hearted slasher subplot, this movie’s for you. I would recommend this to budding writers to provide an example of how not to write screenplays. There are a lot of hidden horror gems that are overlooked by critics and audiences alike. This is not one of them. Don’t waste your time with this movie. It’s not even a so-bad-it’s-good movie, it’s just bad. Like a film school project by a college kid with more bluster than talent. Of course, this is a classic example of how anyone can pick up a video camera and make a movie, but not everybody  should.