Rating: B+/ Bittersweet; funny but with a truly sinister edge, The Truman Show is a true original. In a rare serious role, Jim Carrey plays Truman Burbank, an affable insurance salesman who- unbeknownst to him- is the star of a 24/7 reality program broadcasting the minutia of his life to the world. The director of the show, Kristoff (Ed Harris) tips us off right off the bat to Truman’s situation. The public, tired of actors getting paid to display phony emotions to the camera, positively gets off on watching Truman’s unwitting participation in the show. All of Truman’s ‘friends’ and ‘loved ones’ are actors paid to rattle off lines and pretend they like him, even his beer-chugging bestie (Noah Emmerich) is reading off a script. 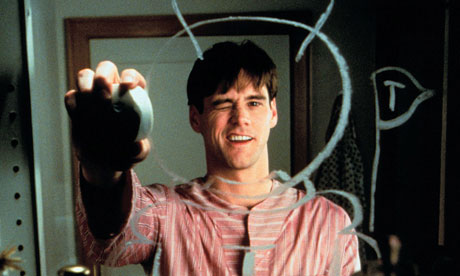 One day an odd chain of events culminating in the ‘father’ Truman thought was dead appears in his life as an extra leads Truman on an odyssey to ultimately discover the bizarre secret behind his existence. Of course his ‘wife’ (Laura Linney) and ‘mother’ (Holland Taylor) are intent on keeping him in the dark as long as possible, preferably forever, and Truman’s reasonable concerns begin to look an awful lot like a severe mental disturbance as he is gaslighted by literally everyone in his environment.

The Truman Show is a movie about the exploitative nature of so-called ‘reality television’ and the malleable nature of reality itself. Truman was an unwanted baby who was given a comfortable life within an idyllic suburban landscape and his director, Kristoff, insists that it’s better this way,  that Truman is lucky. But despite it’s lovely exterior, nothing about Truman’s world is real. In this way The Truman Show is the ultimate dystopian film. Sporting a striking color scheme and a great cast, The Truman Show balances it’s humor with it’s more tragic elements, and Jim Carrey turns in a remarkably restrained performance that simultaneously offers the off-the-chain funnyman some wiggle room to go a little crazy.

There is even a little bit of a black comedy element to the film as we feel for Truman’s outrageous yet eerily plausible plight, and the very things that get us laughing are the same ones that have us cringing in discomfort. This is science fiction of a more philosophical kind; devoid of aliens, spaceships, and cyborgs, The Truman Show instead makes us contemplate the terror of a world where nothing we see is real, and the people who supposedly love and protect us are just actors playing parts. It’s a genuinely scary idea, administered with a surprisingly light touch while at the same time not ignoring the darker aspects of the story brings up.

Although it can get a little heavy-handed at times, The Truman Show is worth watching by anyone who is sick and tired of formulaic, run-of-the-mill Hollywood claptrap, and wants to see a film take a slightly different approach to the themes of reality and societal ills. More inspired than most of the films the studios churn out yearly, The Truman Show is a true original and a true delight, a film that will be remembered after a number of movies that try to provide satire and social commentary have totally slipped people’s minds. It’s a different kind of Jim Carrey role, but not one that will be written off easily.