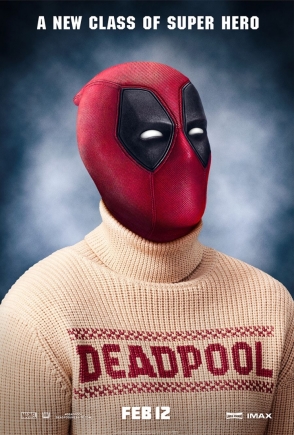 Rating: C-/ Loud, crass, self-indulgent, and with more dick and blow job jokes than a stand-up comedy hour commandeered entirely by drunken frat boys, Deadpool is an over-rated, interminable mess. You can practically hear the jokes fall flat at delivery, which is kind of sad, because you can tell it really really wants to be funny, but somehow it just keeps coming up short of charm and laughs.

Wade Wilson (Ryan Reynolds) is a loud-mouthed mercenary who falls hard for a hooker with a heart of gold, Vanessa (Morena Baccarin.) Shockingly, she loves him back, and they are making their wedding plans when Wade collapses and is diagnosed with late-stage terminal cancer. Wade leaves Vanessa soon after, reluctant to put her in a position where she is forced to care for him for the rest of his short life.

Recruited by a shady man (Jed Rees) to sign into a experimental surgery, Wade is tortured to within an inch of his life- but also cured of cancer and given superpowers. Turns out the nefarious Francis (Ed Skrein) wants men with superhuman abilities to use as slaves- or something. Francis is just another villain in a long line of villains whose motivations aren’t entirely explained or explored. Wade comes out of the ‘treatment’ badly burned but more mouthy and sarcastic than ever, and he puts his regenerative powers to good use taking down Francis’ goons in hopes of finally teaching Francis a lesson of the painful and ultimately fatal kind.

Wade wants to reunite with his lady love, but he’s afraid his altered appearance will repulse her. Additionally, the superhero Colossus (Stefan Kapicic,) who’s a bit of a goody two-shoes, wants Wade to abandon his self-serving hedonism and join the X-Men. We have to remember this is the Marvel universe, everything here is connected to everything else Marvel. So that brings up the question is; I like superhero movies, I like Ryan Reynolds; what went wrong? First of all, Deadpool is very meta, too meta for it’s own good, in this reviewer’s humble opinion.

I’d run out of fingers on both hands if I counted all the times Wade breaks the forth wall, practically winking at the audience as he reminds us that yes, this is just a movie. This kind of interaction with the audience should be used sparingly, but Deadpool pulls all the stops in being cheeky and self-aware, and is filled with pop culture references that will be irrelevant in twenty years or so. As a result it feels obnoxious and self indulgent. It doesn’t help that most of the jokes try way too hard and fall short of being anything other than cringe-worthy.

The humor reminded me of Unbreakable Kimmy Schmidt, another much-loved piece of popular culture that just didn’t do it for me. Instead of being the way comedy should be, a steady machine gun patter of witty jokes, Deadpool‘s humor just kind of draws itself out past the point where the gag has any chance of being funny. It practically begs us to be in on the joke, reveling in it’s own crudity and meta silliness. I have no problem with crude humor; There’s Something About Mary is one of my favorite comedies.

But the movie and the character of Wade himself remind me of a needy, lonely grade schooler who’s trying a little too hard to get a laugh out of his classmates, whether it by making an always-witty ‘that’s what she said’ crack or settling on making fart sounds with his armpit. Deadpool has no natural comedic timing and just kind of lingers around like the fetid stench of a corpse, all while trying painstakingly to convince us it’s not just another superhero movie, Goddamnit!

It’s soul, however, is as pedestrian as they come. If you like superhero comedies, I recommend The Mask with Jim Carrey or Kick-Ass, which actually have lots of laughs (although like Deadpool, Kick-Ass is best left for the over-18 crowd.) This movie had a great marketing campaign and while many people love it, I just can’t join in their revelry. It doesn’t help that Wade comes off as an annoying try-hard, whose juvenile humor takes a belly-flop into awkward squirmy territory more often than it hits home. Deadpool reaffirms what I believe about good humor; while crudity has it’s place, it’s falls short when in the absence of genuine wit and good timing. Watch the side-splittingly hilarious  What We Do in the Shadows to see how comedy is done, and leave this movie to the flourishing audience of grown men with the sense of humor of nine-year-old boys. 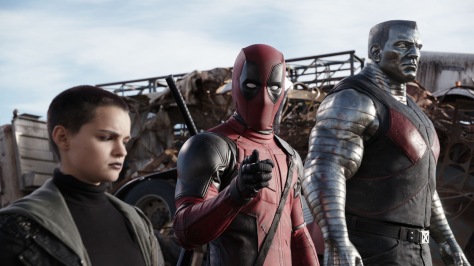