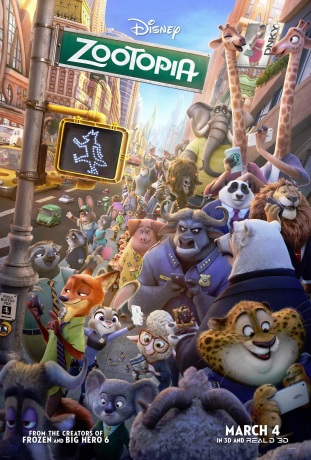 Rating: A-/ So, I got to go see a movie in the cinema for the first time in ages the other day. My sister really wanted to see Zootopia and she was afraid her friends at school would spoil the ending for her before she got a chance to watch it. To be honest, I was pretty psyched to see it too, and my dad took us as a family to the movies (except for my mom, who wasn’t feeling well.) And I’ve got to say, Zootopia (or Zootropolis, as it is sometimes called) is a very cute family movie. But among the cuteness and the comedy and the talking animals, there’s a very good message and social commentary afoot. It’s not just a dumb kids film, there’s an emotional and socially conscious core that is rare to find in any family flick, except maybe those that happen to be made by Pixar studios. 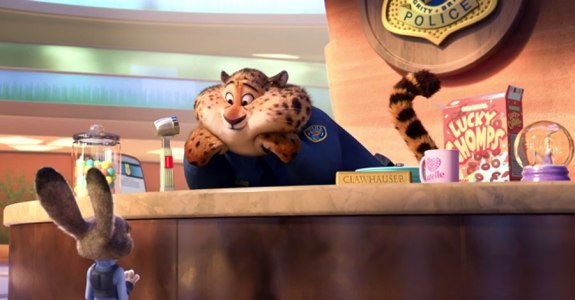 In a world full of anthropomorphic animals where predators have learned to curb their baser instincts and live peacefully among the herbivores, Judy (voiced by Ginnifer Goodwin, Once Upon a Time) wants to be a police officer. There’s just one problem; Judy is a bunny, and bunnies aren’t considered to be cop material. Determined to live out her dream, Judy leaves her po-dunk carrot-farming rabbit town and the nest of her overprotective parents (Bonnie Hunt and Don Lake) and goes to the big, species diverse city of Zootopia, where ‘anybody can be anything,’ allegedly.

She goes to the police academy and works her little bunny butt off, but she’s naturally at a disadvantage, because most of the police officers are humungus, eminently threatening animals and she is small and fuzzy and adorable. But Judy persists, and while working parking duty as a newly appointed real life cop, she meets Nick (Jason Bateman) a conniving fox who seems to affirm everything her parents have taught her about the species. But there’s more to Nick than meets the eye, and soon Nick and Judy are thrown together in a case where predators seem to be arbitrarily going savage and attacking those around them. Understandably, when the incidents go public, the plant eaters begin to fear for their lives, and prejudice and suspicion run rampant in this supposedly civilized community.

Okay, it’s not exactly subtle with it’s message of intolerance and racism, but somehow Zootopia, well, works. It’s kind of like a detective story as Nick and Judy go across the different biome communities looking for the scoop behind the terrifying attacks. There’s a plethora of funny/adorable/sinister characters, including a mafioso vole (Maurice LaMarche) doing his best Marlon Brando impersonation and a bubble headed leopard cop (Nate Torrence) confined to eternal desk duty. Due to sympathetic characters and a willingness to take on risky subjects, Zootopia is a compelling watch and has something to offer for kids and adults (though it might be intense for toddlers and kids unable to tolerate the edgier aspects of the story.) The jokes work, too, staying away (for the most part) from childish toilet humor and thinly veiled sexual innuendoes. Even the somewhat misplaced reference to Breaking Bad hits home. And the sloths are perfect. Who hasn’t felt like stabbing themselves through the eye with a pencil while waiting interminable lengths of time at the DMV?

Tender, touching, and often very funny, Zootopia lives up to the hype, and not just for the below-thirteen set either. Judy in particular is a strong and well-crafted character with her own set of fears, insecurities and flaws who nevertheless proves to be a great role model for young girls who have big dreams and may be facing seemingly insurmountable odds. The variety of backdrops and characters mean that Zootopia never gets boring, and I actually found myself looking forward to seeing it again in it’s entirety hours after I watched it. To provoke that kind of reaction, you have to be doing something right. Disney’s recent efforts have gotten to the point of being almost Pixar good, and that’s strong praise. Dreamworks is going to have to come up with something great soon if it’s going to keep up.