Rating: B/ For the most part, the critics didn’t really seem to like this movie, and I can understand why; the protagonist is fairly unlikable, the subject matter is uncomfortable and sometimes downright unpleasant to watch,  and the film itself just kind of ends abruptly, with no definitive conclusion or explanation. I Smile Back is not a easy movie, but it is a true movie, a film for anyone who’s ever been told they have a good, blessed life, and to stop being depressed and pull themselves together for Christ’s sakes. Some people are miserable because they live under terrible circumstances, and for some people, the reason for their unhappiness is much more complicated. You can have everything in the world, and still find it hard to get up in the morning and face a day full of people who, to you, seem cruel-natured and callous.

Laney (Sarah Silverman) is a hot mess. She guzzles booze, snorts coke, and cheats on her devoted husband (Josh Charles) with another man (Thomas Sadowski.) She obsesses about weird things, like whether her prepubescent son (Skylar Gaertner) has dried his testicles after taking a bath. She has a manic booze-and-drug-fueled episode and misuses her daughter (Shayne Coleman)’s teddy bear in a disturbing way.

Laney is one of millions of people whose life is affected by mental illness, but her illness (in this case manic-depression) doesn’t define her. There are times when she is an amazing mother, and there are others when she’s a vapid head case. Her husband, Bruce, loves her, but is bogged down by the challenges her erratic behavior presents. Bruce enrolls Laney in rehab for her drug and alcohol abuse, and she seems to be getting better. However, meeting her estranged father (Chris Sarandon,) who abandoned her when she was nine, leaves her life in a tailspin. In abrupt, sometimes dreamlike vignettes, we see her good times and her out-of-control crazy times trapped within a wild, unpredictable psyche.

Laney was not a likable character. I think I could sympathize with her to some extent because, even though I’m not as much of a slut as her and don’t abuse alcohol and drugs, I could relate to her overactive, troubled mind and I saw her good moments along with her bad ones; for every time she would act wacko or be a total bitch, there was another where she was a genuinely devoted, concerned mother; drawing pictures on her kids’ paper lunch bags every day or comforting her son after a nightmare.

You also saw how much her illness affected her kids, even though the little one was to some extent too young and innocent to realize what was going on. We see this concern manifest itself in anxiety and ticcing on the son’s part; he obviously has a lot more going on psychologically than is shown here and the film just skims the surface. Sarah Silverman is kind of a love-her-or-hate-her comedy personality, but she shows remarkable depth and restraint, pensive drama suits her well.

I also liked that they allowed the husband some depth, he was sweet and accommodating at first, then not so much as the movie went on. There’s only so long you can play along with your wife’s hysterical behavior before you just decide to get you and your kids out of an all-around terrible situation. Unlike most movies with these kinds of relationships between relatively straight-laced people and their erratic, unstable partners, the writing is good enough that you can see what made Bruce fall in love with Laney in the first place.

Some people will be disappointed by the anticlimactic downer of an ending, and I would have liked to have seen a little more of the characters before the movie just ended, seemingly unsure of what to do with itself. But at the same time I understand that not every ending of a mental health/addiction story can be a happy or even a conclusive one. However, the final scene will make you feel sad for all the characters who you’ve come if not to love, to understand on some deeper level. I Smile Back is sometimes a difficult watch, but it’s also a relevant presentation of a situation where having all the support and love in the world somehow isn’t enough. 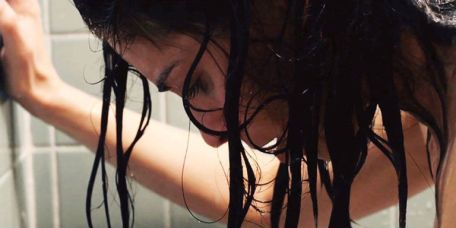