Rating: B-/ While the title of this film is The Bad News Bears, it could also easily be called How Not to Coach a Little League Team: The Movie. Morris Buttermaker (Walter Matthieu) is a alcoholic loser and professional swimming pool cleaner who’s made a total mess of his life. Hoping to make a little money on the side, he signs up to coach a team of foul-mouthed misfit kids, with no intention whatsoever of being a good role model.

But Buttermaker might just surprise himself when he gets sucked into the kid’s individual dramas, and he actually finds himself making somewhat of an effort in between potty-mouthed rants and lots and lots of beer, especially when he convinces his ex’s spirited daughter Amanda Wurlitzer (Tatum O’Neal) to join the team. With the help of Amanda and local Harley-riding ‘Bad Boy’ Kelly Leak (Jackie Earle Haley,) Morris might just have what it takes to make the team great. But will the Bad News Bears get suckered in by bullshit competition and league politics?

Even though a remake of this movie was made in 2005 with Billy Bob Thornton, it is hard to imagine a family movie with this content being made again in the United States. Call it good taste or tendency to get overly sensitive and butthurt, but The Bad News Bears has material in it that just wouldn’t fly in today’s politically correct environment. Preteens fight, drink beer, smoke, and use words like ‘retard,’ ‘nigger,’ and ‘spic’ in a astoundingly blase manner. One kid used language that honestly shocked me; not because I’m a prude or particularly have a problem with bad words, but because this is marketed as a kids film and stars child actors and seems to be a kids film for all intents and purposes- it just is astonishingly potty mouthed for a movie that is supposedly for families. That said, The Bad News Bears is a good movie- not a great one, as some would say- about finding the fun behind the sport of baseball and not taking the game too seriously.

It’s ridiculous how some Little League parents get their panties in a twist if they don’t think their little angel is the best on his team. This kind of mindset sends bad messages that winning is everything and is somehow superior to common courtesy and good sportsmanship and it makes sour losers out of the kids. Baseball is a game, it’s supposed to be fun… right? The heart and soul of the movie focuses on how Buttermaker goes from not giving a damn to giving a damn about the kids, but the story is refreshingly non sappy and unsentimental from beginning to end. As you might have guessed, it’s barbed, acerbic, and filled with bad behavior from everyone, not just the Bears. Seeing the coach of the team our intrepid anti-heroes butt heads with actually makes Morris seem like the lesser of two evils.

The kids in this movie are very natural for the most part, and Matthieu never mugs to get the reaction he wants from the audience. Ultimately, we end up feeling more bad for Buttermaker than anything; he’s a screw-up, and he knows it. He wants the love and admiration of the girl he sees as his daughter but he doesn’t know how to set about earning it. He used to be a pretty good ball player, but time and gallons upon gallons of cheap bear have rendered him a joke, and his tough-guy attitude is a guise the kids can see right through. The Bad News Bears wisely offers no pat solutions for Buttermaker’s loneliness or alcoholism; in fact, he stays much the same as he did at the film’s beginning, slovenly and ill-tempered. We see moments of improvement in how he interacts with the kids and how the kids interact with him.

The Bad News Bears has some funny moments, but it’s quite dark at others, it’s hard to believe this was made with young children in mind.Parents might want to preview it due to the near-constant barrage of salty language we are exposed to from square one. I didn’t love this movie; I enjoyed it from beginning to end but it didn’t do wonders for me and it isn’t as much of a comedy as you might think. Honestly, I kind of wanted to smack the kids around a little bit for their mouthiness but then, obviously, Buttermaker was just as bad except that he was a grown man, so he knew better. Nevertheless, this movie’s lack of cheap pathos and the charisma of it’s leads makes it better than the majority of films of it’s kind. After all the treacly-sweet family films that hit the shelves these days, this movie is like a breath of fresh air. Or a cold beer. Sarcastic and smart, this snarky, attitudinal comedy is still potent forty years after it’s original release. 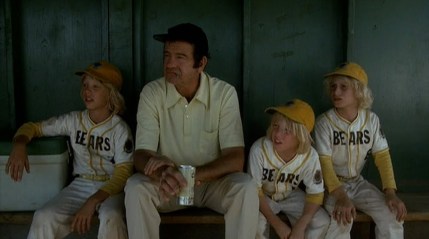